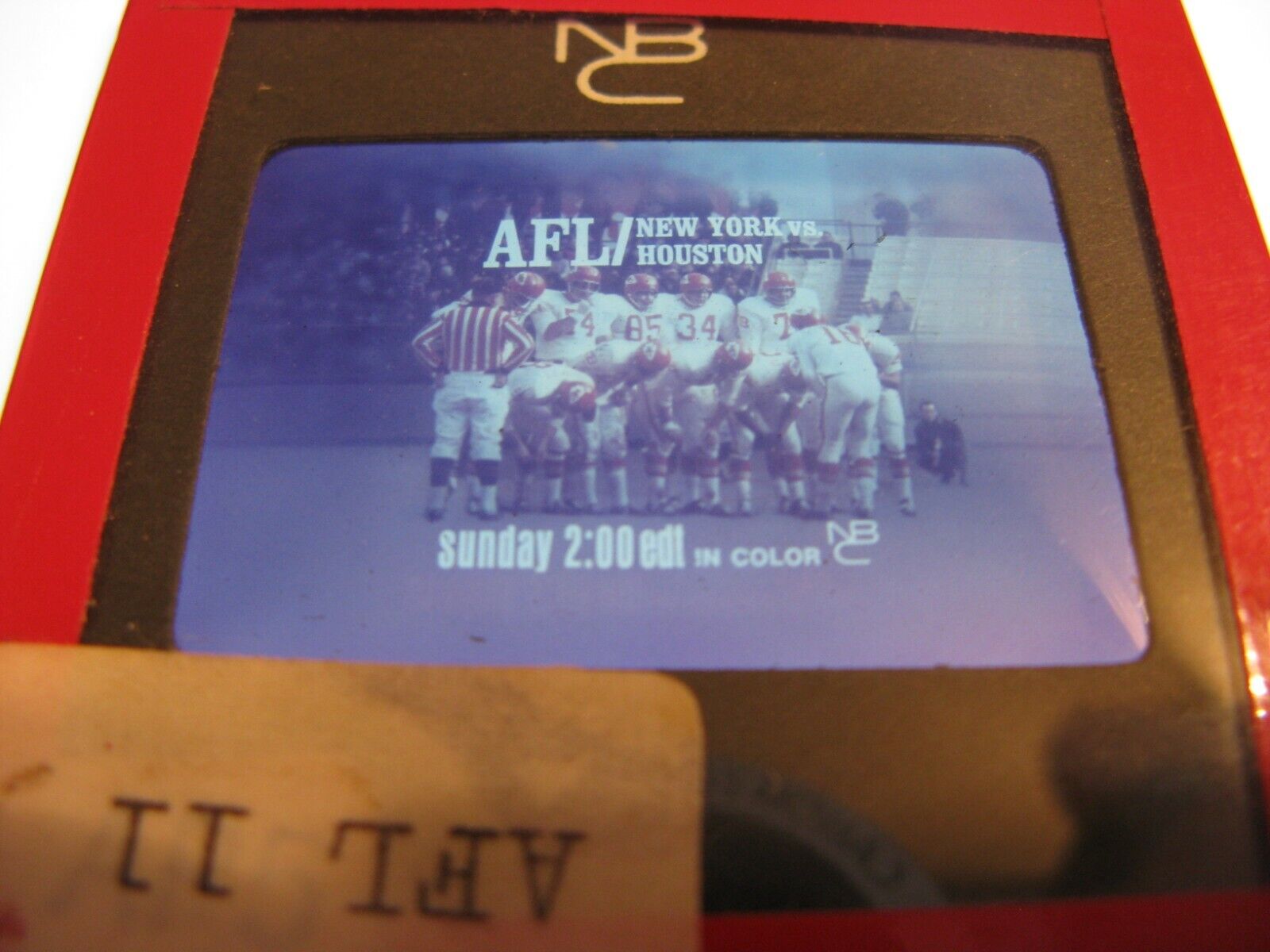 I'm selling 1- original glass slide promoting an AFL (American Football League) game between the New York Giants and Houston Oilers.This was before the AFL league merged into the NFL. I believe the team shown in the promo is the Kansas City Chiefs. I guess the guy making the promo didn't know anything about football, or which team was who. The slide states "In Color". This is a rare slide when color broadcasting just started, and was a whole new look for televised sports. The AFL–NFL merger was the merger of the two major professional American football leagues in the United States at the time: the National Football League (NFL) and the American Football League (AFL). It paved the way for the combined league, which retained the "National Football League" name and logo, to become one of the most popular sports leagues in the United States. The merger was announced on the evening of June 8, 1966. Under the merger agreement, the leagues maintained separate regular-season schedules for the next four seasons—from 1966 through 1969—and then officially merged before the 1970 season to form one league with two conferences. This slide was used in a Filmchain at the NBC studio in Washington. The Filmchain was a machine that would capture the image, turn it into an electronic signal, then converted back into a picture on your television set. This is a 35mm transparency (2" x 2" slide) encased between two pieces of glass and taped at the edges to hold it together. They were used to promote the day and time of an upcoming show. This is an original slide that was used on the air. It is not a reproduction.These slides were brought home by my father as his personal souvenirs. Good Luck! NOTE: If you buy more than one slide from my auctions, I won't charge shipping for the others. Just shoot me an email requesting an invoice for all purchases. Be sure to check out my other original photo's and vintage television collectibles I'm currently selling as well. My father worked at NBC (WRC in Washington, D.C.) from 1947-1978. He started out as a Cameraman and in a few short years was promoted to Technical Director. He was one of the true television pioneers of his time. He was in charge of assigning the entire engineering crew and then switching the show in the control room. He was also an excellent photographer and won many awards for his photographs at the Washington Camera Club. He would always bring his Nikon and Hasselblad camera's to work with him to take behind the scenes pictures of shows, interviews, and breaking news events. He passed away in 2004 and I have now decided to sell some of his collections. Keep watch for my future auctions where I have many rare photos that have never been seen by the public.