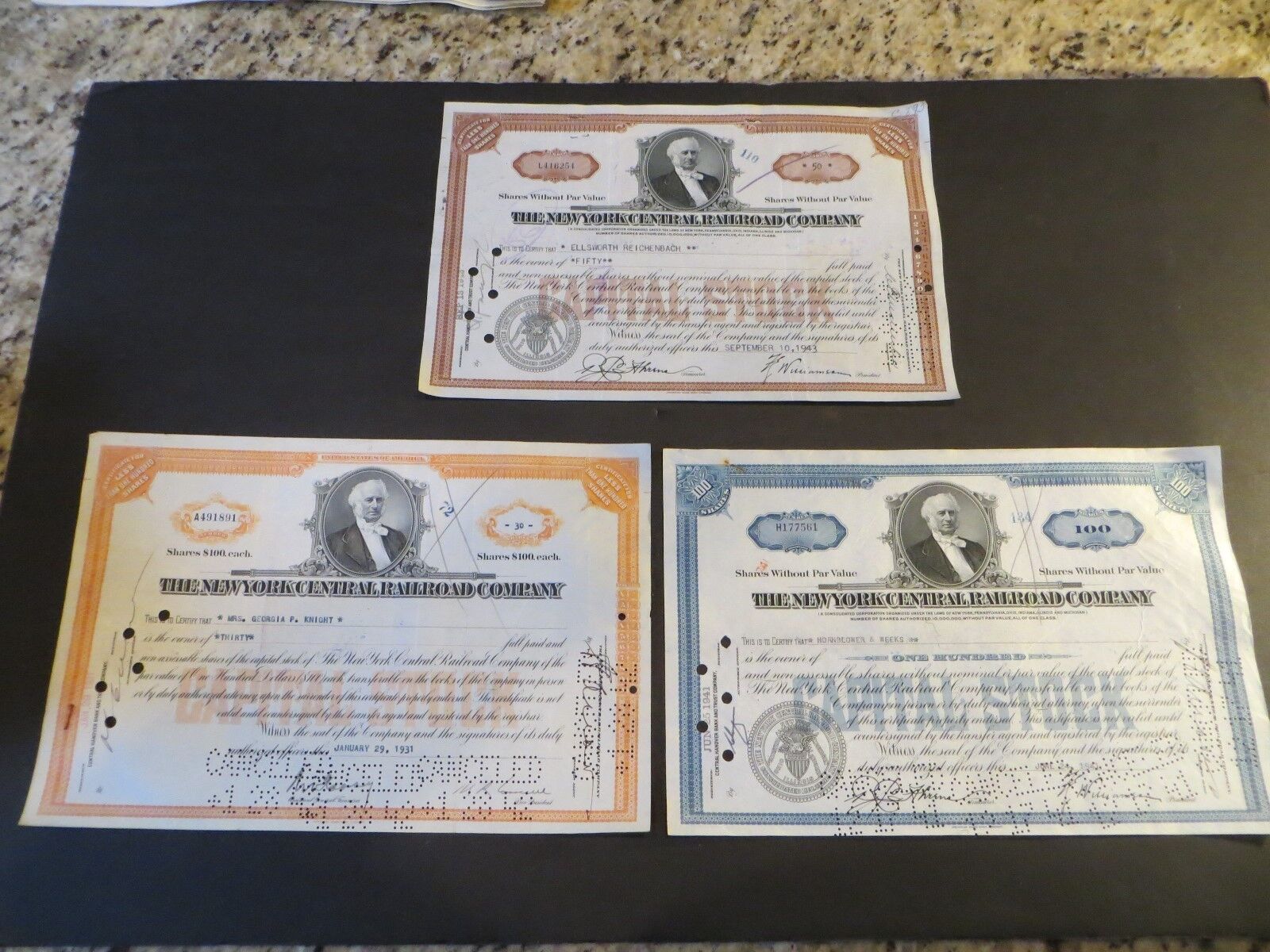 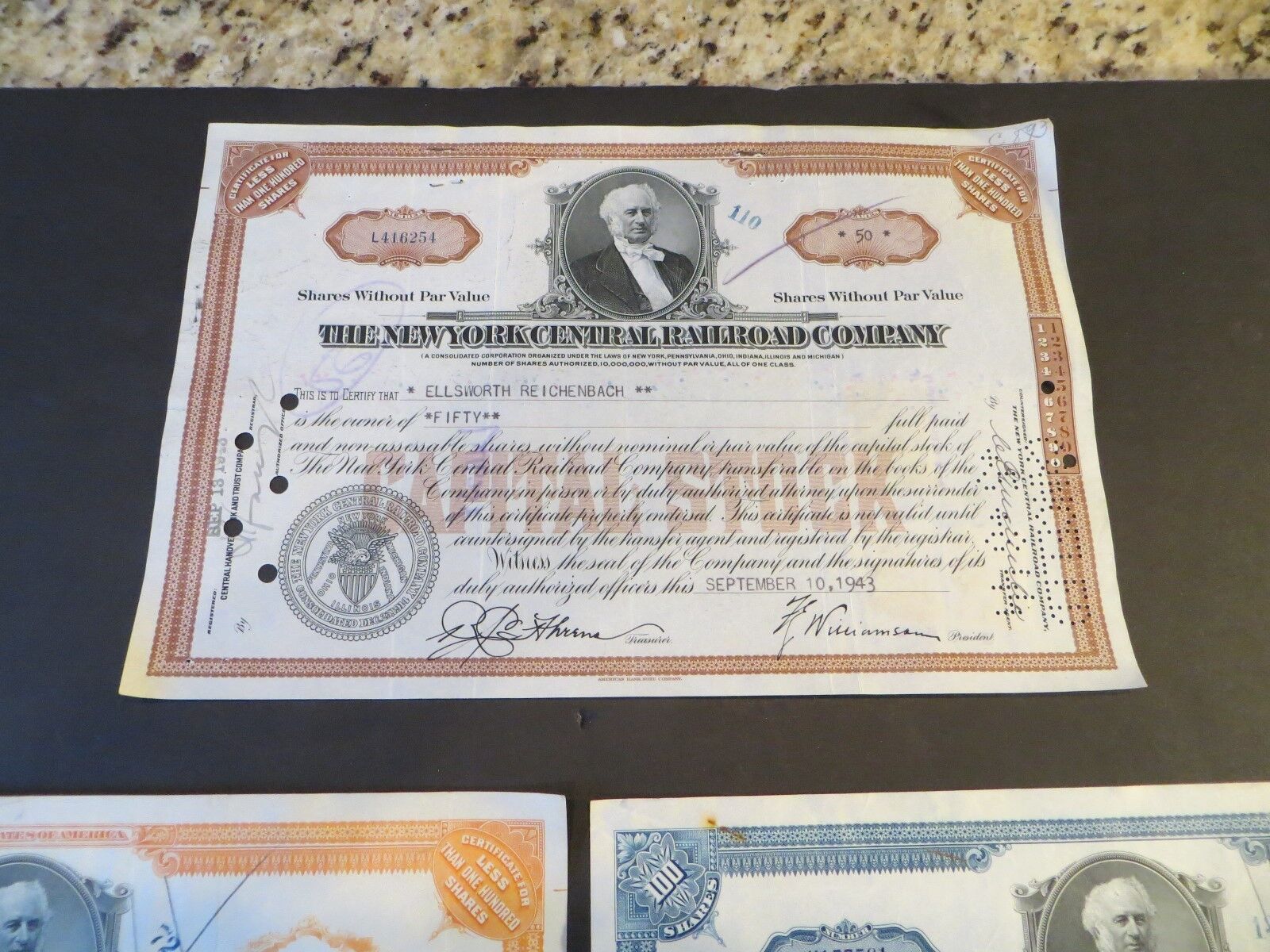 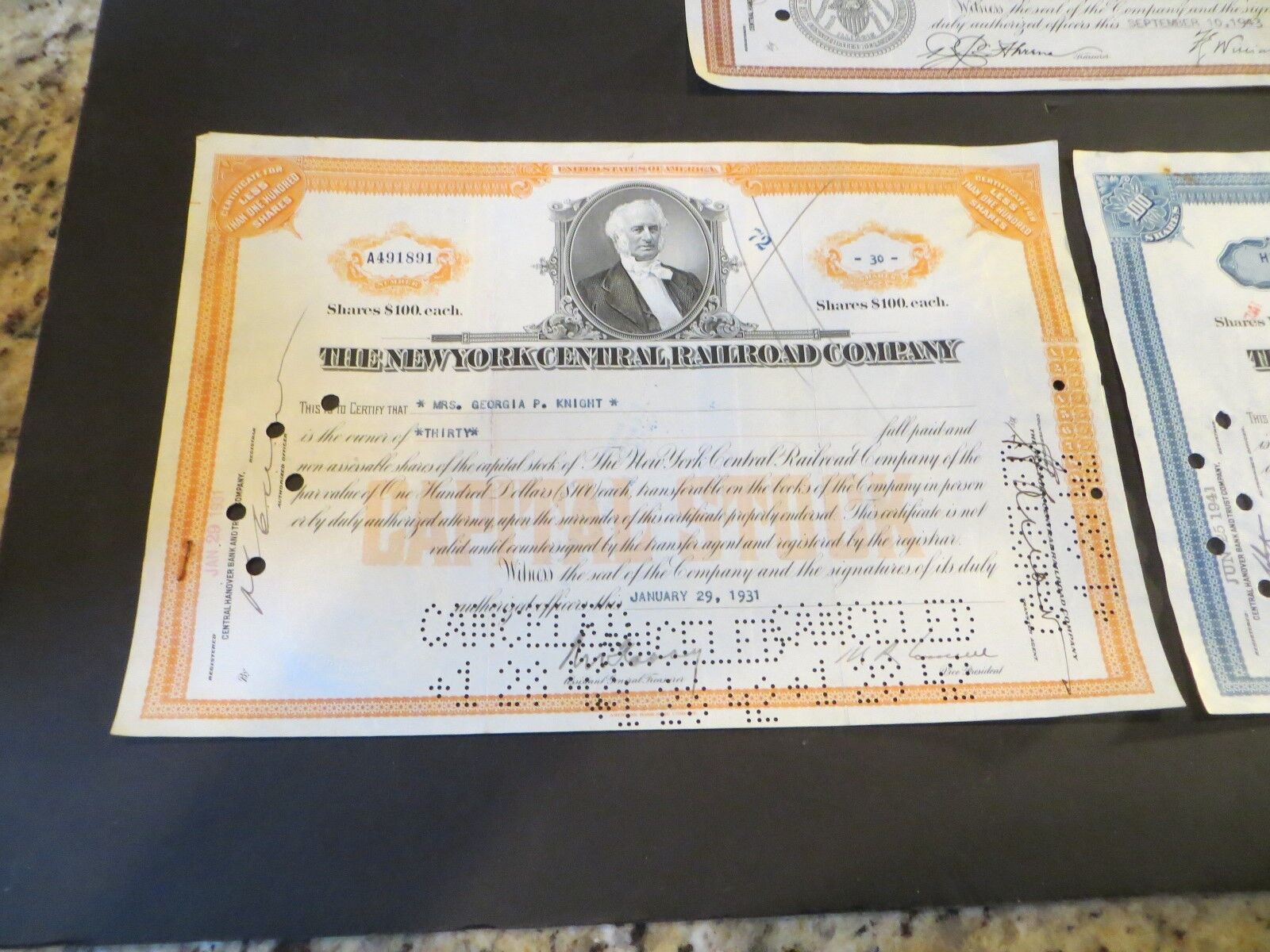 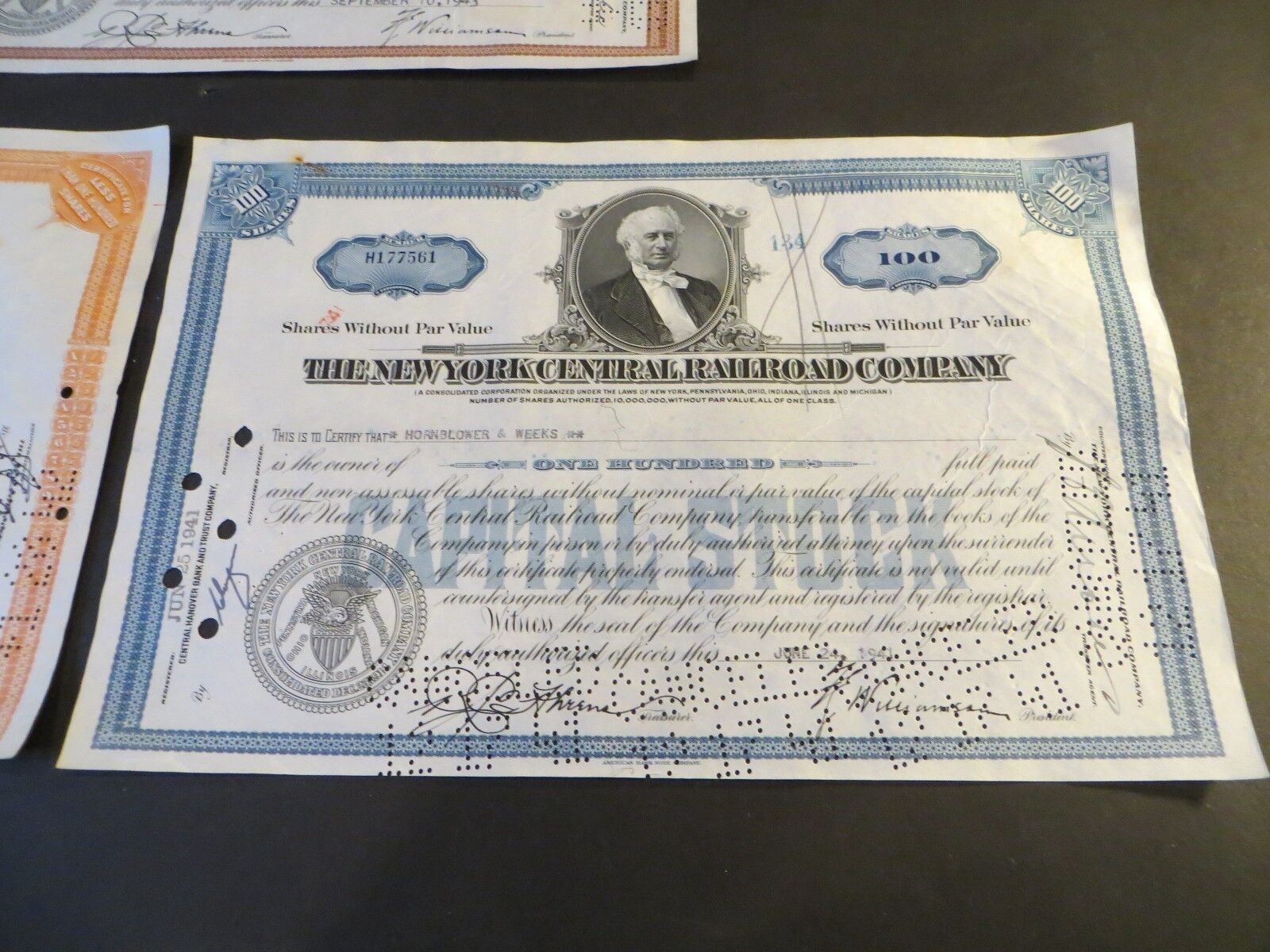 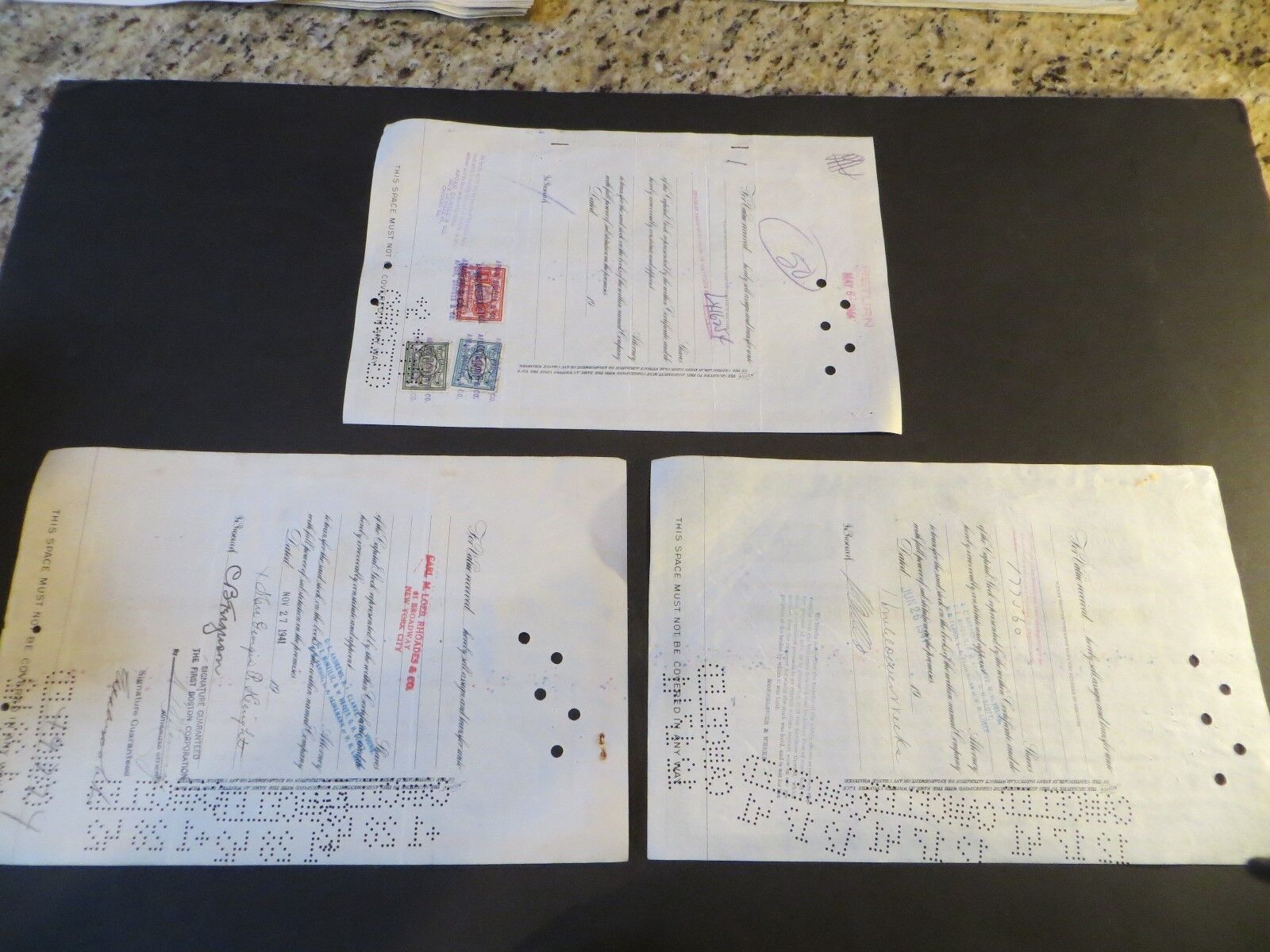 You get THREE stock certificates--one orange, one brown and one blue, 1930s/1940s. The New York Central Railroad (reporting mark NYC), known simply as the New York Central in its publicity, was a railroad operating in the Northeastern United States. Headquartered in New York, the railroad served most of the Northeast, including extensive trackage in the states of New York, Pennsylvania, Ohio, Michigan, Indiana, Illinois and Massachusetts, plus additional trackage in the Canadian provinces of Ontario and Quebec. Its primary connections included Chicago and Boston. The NYC's Grand Central Terminal in New York City is one of its best known extant landmarks. In 1968 the NYC merged with its former rival, the Pennsylvania Railroad, to form Penn Central (the New York, New Haven and Hartford Railroad joined in 1969). That company soon went bankrupt and was taken over by the federal government and merged into Conrail in 1976. Conrail was broken up in 1998, and portions of its system was transferred to the newly-formed New York Central Lines LLC, a subsidiary leased to, and eventually absorbed by CSX. That company's lines included the original New York Central main line, but outside that area it included lines that were never part of the NYC system. On July 1, 1900, the Boston and Albany Railroad was leased by the NYC, although it retained a separate identity. In 1914 the name was changed again, forming the modern New York Central Railroad. The Cleveland, Cincinnati, Chicago and St. Louis Railway, also known as the Big Four was formed on June 30, 1889 by the merger of the Cleveland, Columbus, Cincinnati and Indianapolis Railway, the Cincinnati, Indianapolis, St. Louis and Chicago Railway and the Indianapolis and St. Louis Railway. The following year, the company gained control of the former Indiana Bloomington and Western Railway. By 1906, the Big Four was itself acquired by the New York Central Railroad. The NYC had a distinctive character different from its arch rival, the Pennsylvania Railroad and its mountainous terrain. The NYC was best known as the Water Level Route; most of its major routes, including New York to Chicago, followed rivers and had no significant grades. This influenced many things, including advertising and most notably locomotive design. Steam locomotives of the NYC were optimized for speed on that flat raceway of a main line, rather than slow mountain lugging. Famous locomotives of the system included the well-known 4-6-4 Hudsons, particularly the 1937-38 J-3as; 4-8-2 WWII-era L-3 and L-4 Mohawks; and the postwar Niagaras: fast 4-8-4 locomotives often considered the epitome of their breed by steam locomotive aficionados. Despite having some of the most modern steam locomotives anywhere, the NYC dieselized rapidly, conscious of its by-then difficult financial position and the potential relief that more economical diesel-electric power could bring. Very few NYC steam locomotives still exist, due to then-NYC high executive Alfred E. Perlman's total lack of sympathy for historic preservation of NYC's finest steam. All Hudsons and Niagaras were sent to the scrapper's torch by 1956. In 2008, the only surviving big steam locomotives are two 4-8-2 Mohawk locomotives: L-2d Mohawk #2933 (at the National Museum of Transport in St. Louis, Missouri) and dual-purpose, modern L-3a Mohawk #3001 (at the National New York Central Railroad Museum in Elkhart, Indiana). The story of their survival is a fascinating one: L-2d #2933 was somehow overlooked during the 1956-57 scrapping process, and was literally hidden for years after this by sympathetic NYC employees at the NYC's Selkirk Yard, New York roundhouse, behind large boxes. In January 1962, when scrapping her would have been a public-relations disaster, she was donated to the St. Louis museum. Since the last NYC steam locomotive operated in New York State on August 7, 1953, her survival defies credibility. As for the only modern WWII-era NYC steam locomotive to survive, L-3a #3001 (built in 1940), she was sold by the NYC to the City of Dallas, Texas in 1957, to replace a Texas & Pacific locomotive which had been heavily vandalized in a city park. Much later, the National New York Central Railroad Museum traded a Pennsylvania Railroad GG1 electric locomotive for her. She is reportedly in very good condition, and would make a wonderful candidate for restoration to operating condition if suitable trackage existed for her operation. The financial situation of northeastern railroading then became so dire that not even the economies of the new diesel-electric locomotives could change things. Additional Information: These are cancelled stock certificates. Do not wonder if the certificates have been cropped or trimmed; they have not been. They have the complete edges, as issued. There are various cancellation marks and vertical file folds from being placed in a safety deposit box. Since I had several pairs of these when I made this listing, the certificates that you will receive will be of the same exact design as photographed, but will not be the exact certificates pictured. Yours may be for a different quantity of shares and/or a different stockholder. Your certificates may also have different cancellation markings. Terms and Conditions: FREE POSTAL SERVICE FIRST CLASS MAIL SHIPPING to the United States. Uninsured International, including Canada, shipments are $6.00. I have been a member of the American Philatelic Society since 1978 and have been selling on eBay for years. Virginia buyers must pay our Governor's 5.3% sales tax unless you email a PDF of your resale certificate within 24 hours of the end of the auction. Buy with trust and confidence. I will work to make you happy. Thank you for taking the time to view my items. Powered by eBay Turbo Lister The free listing tool. List your items fast and easy and manage your active items.