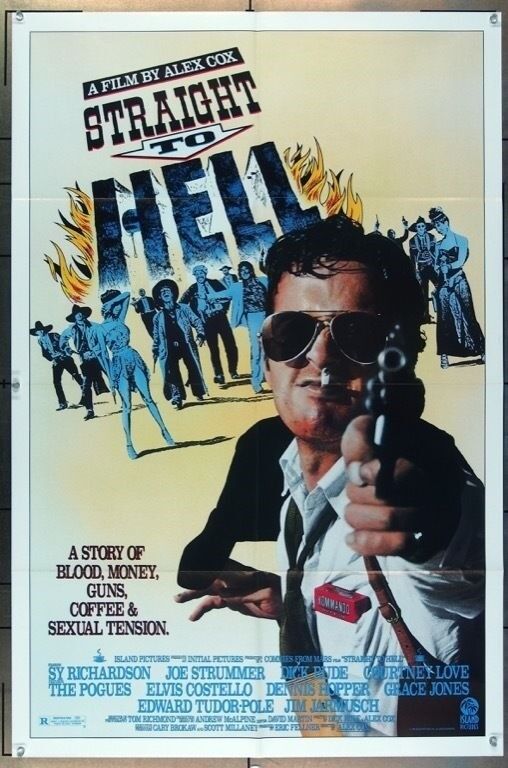 Original Island Pictures One-Sheet Poster (27x41) Folded Very Fine Plus Condition Original Island Pictures One-Sheet Poster (27x41) for the Alex Cox directed film STRAIGHT TO HELL (1987). Here is the dope - from wikipedia.org. Straight to Hell is a 1987 independent action-comedy film directed by Alex Cox, and starring Sy Richardson, Joe Strummer (frontman of The Clash), Dick Rude, and Courtney Love. The film also features cameos by Dennis Hopper, Grace Jones, Elvis Costello, and Jim Jarmusch. Band members of The Pogues, Amazulu, and The Circle Jerks are also featured in the film. The film borrows its title from The Clash's 1982 song of the same name.The film has been called a parody of Spaghetti Westerns,[1] and focuses on a gang of criminals who become stranded in the desert, where they stumble upon a surreal Western town full of coffee-addicted killers. The film is based on Giulio Questi's Spaghetti Western film, Django Kill... If You Live, Shoot! (1967), which Cox was given permission to adapt.[2]Straight to Hell received few positive reviews upon release, and was not a commercial success, although it later gained something of a cult film status.[3] A soundtrack was also released. On 14 December 2010, an extended cut of the film, titled Straight to Hell Returns, was released on DVD, featuring additional footage and digitally enhanced picture quality.[4] This version of the film, under the collaboration of Alex Cox, was also screened at several cinemas as part of a midnight movie theatrical run. The poster is folded and in very fine plus condition. MovieArt Austin guarantees this poster to be the original U.S. one-sheet for this film. MovieArt Austin will sell NO reproductions. ALEX COX - Director Listing and template services provided by inkFrog