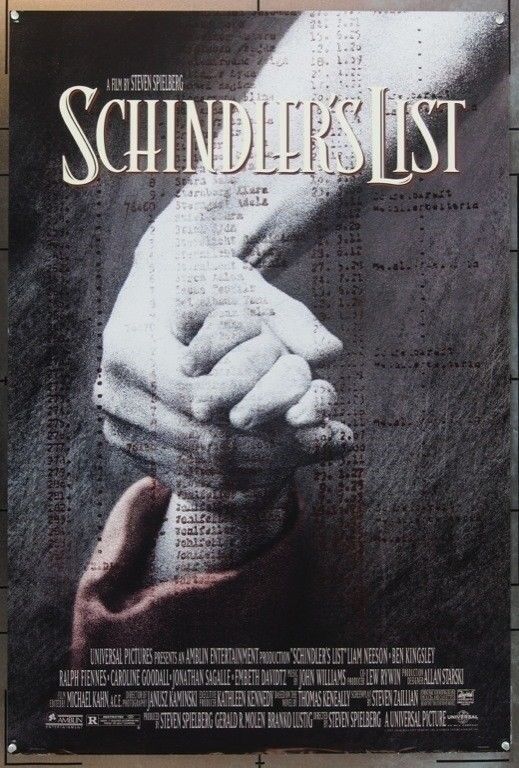 Original Universal Pictures Style A One Sheet Poster (27x41). Rolled. Near Mint. Original Universal Pictures Style A One Sheet Poster (27x41) for the Steven Spielberg Holocaust masterpiece, SCHINDLER'S LIST (1993) starring Liam Neeson, Ben Kingsley, and Ralph Fiennes. Certainly one of the best films ever made about this dark period in human history, and arguably the best Spielberg film to date, this searing historic drama is the story of Oskar Schindler who uses Jews to start a factory in occupied Poland during World War II. After witnessing the relentless horrors endured by the Jews, this seeming opportunist starts to save as many of them as he can. The film was nominated for twelve Academy Awards, including Best Actor to Neeson and Best Supporting Actor to Fiennes. The film won seven Oscars, including Best Picture and Best Director to Spielberg. This original rolled single-sided style A one sheet poster is in near mint condition. STEVEN SPIELBERG - Director Sir Ben Kingsley - Actor Liam Neeson - Actor Ralph Fiennes - Actor Listing and template services provided by inkFrog