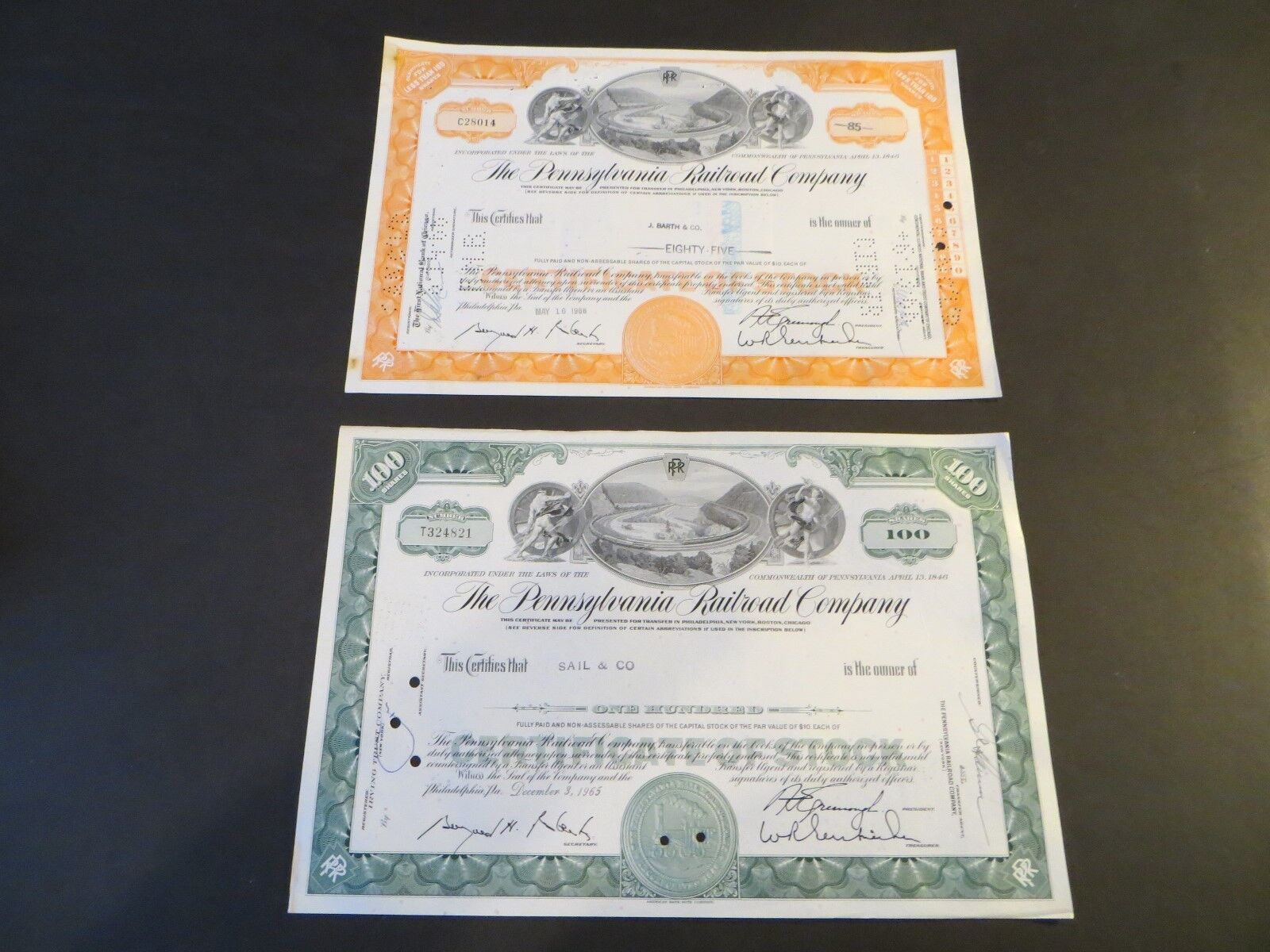 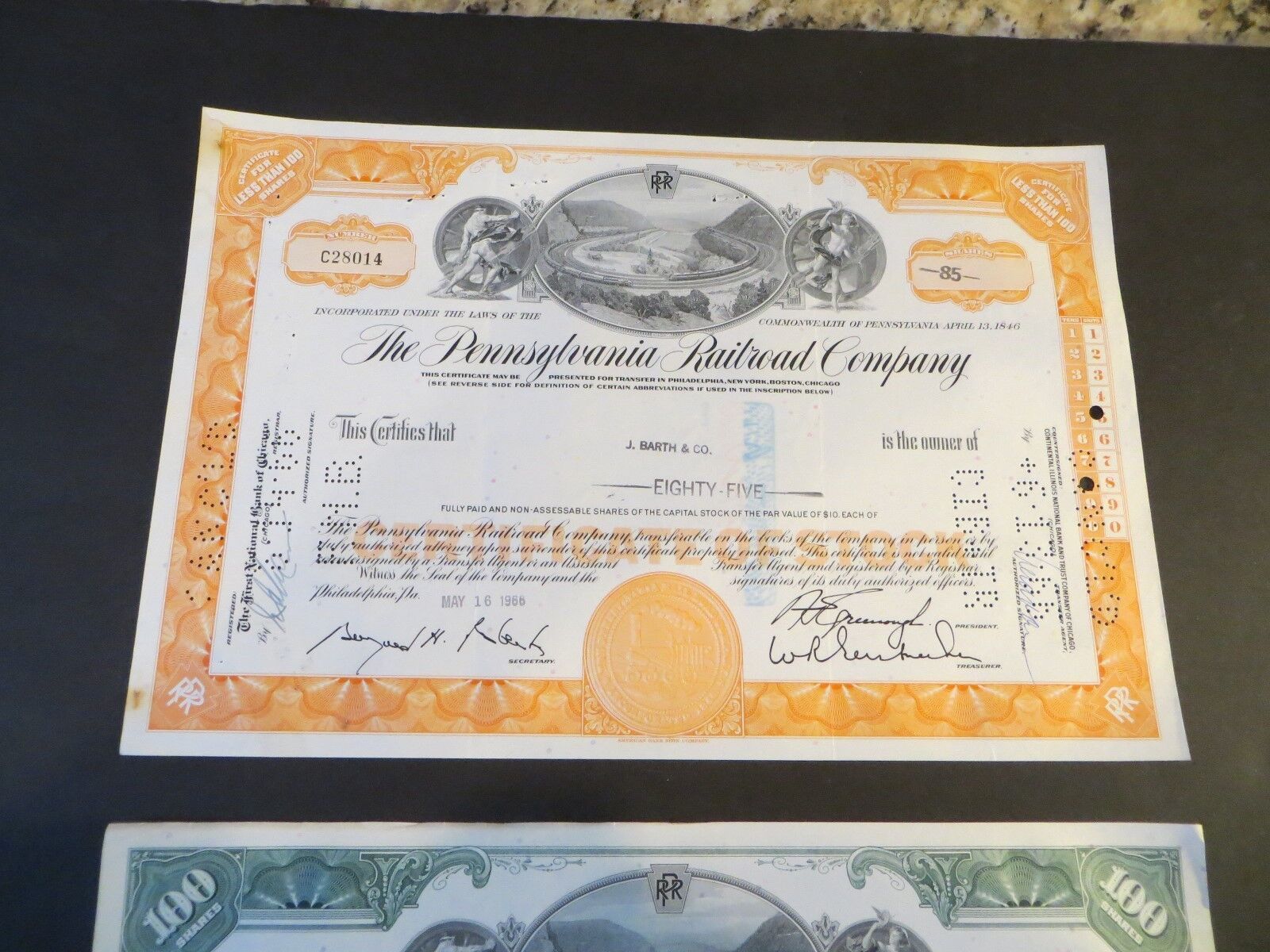 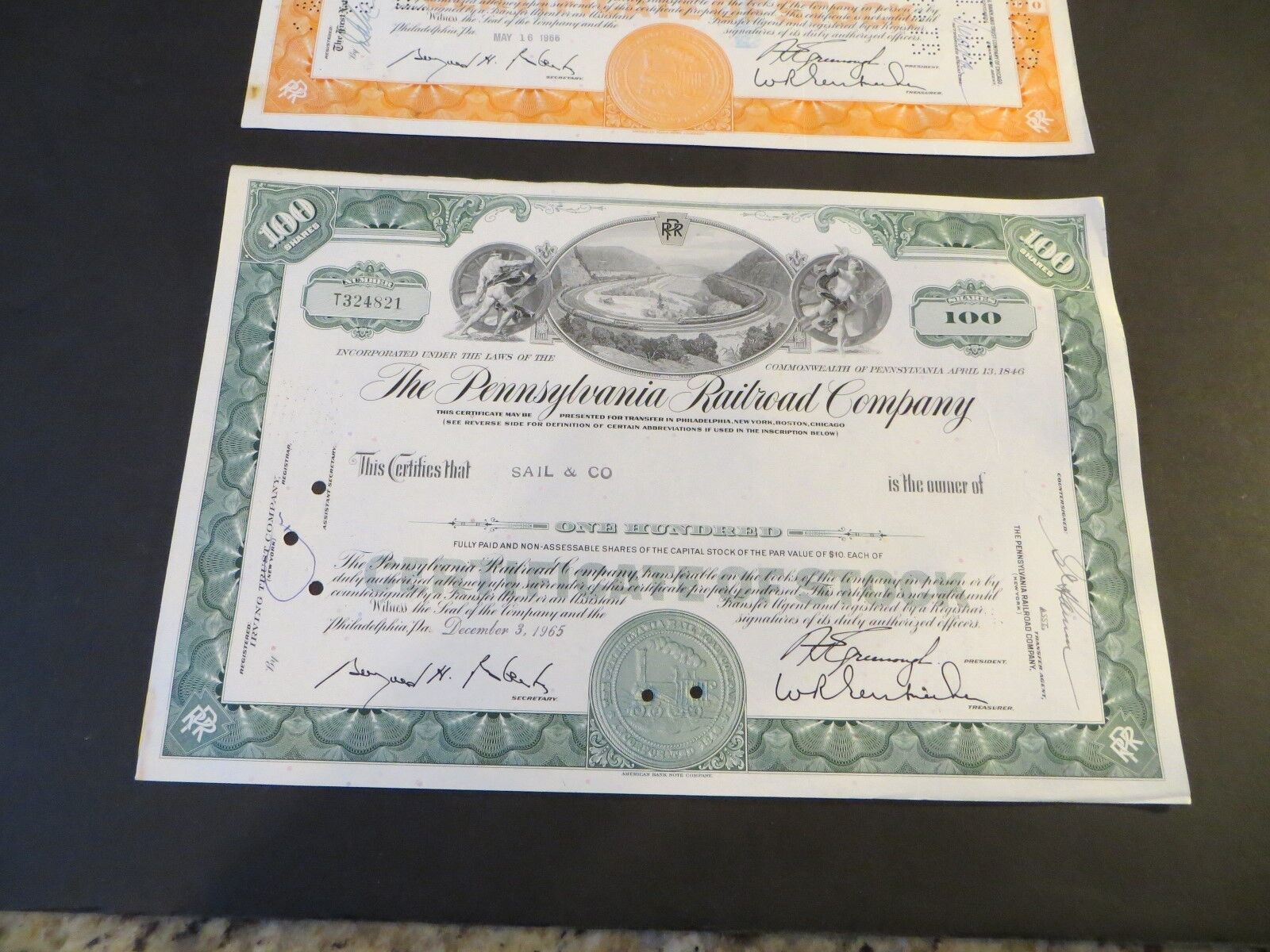 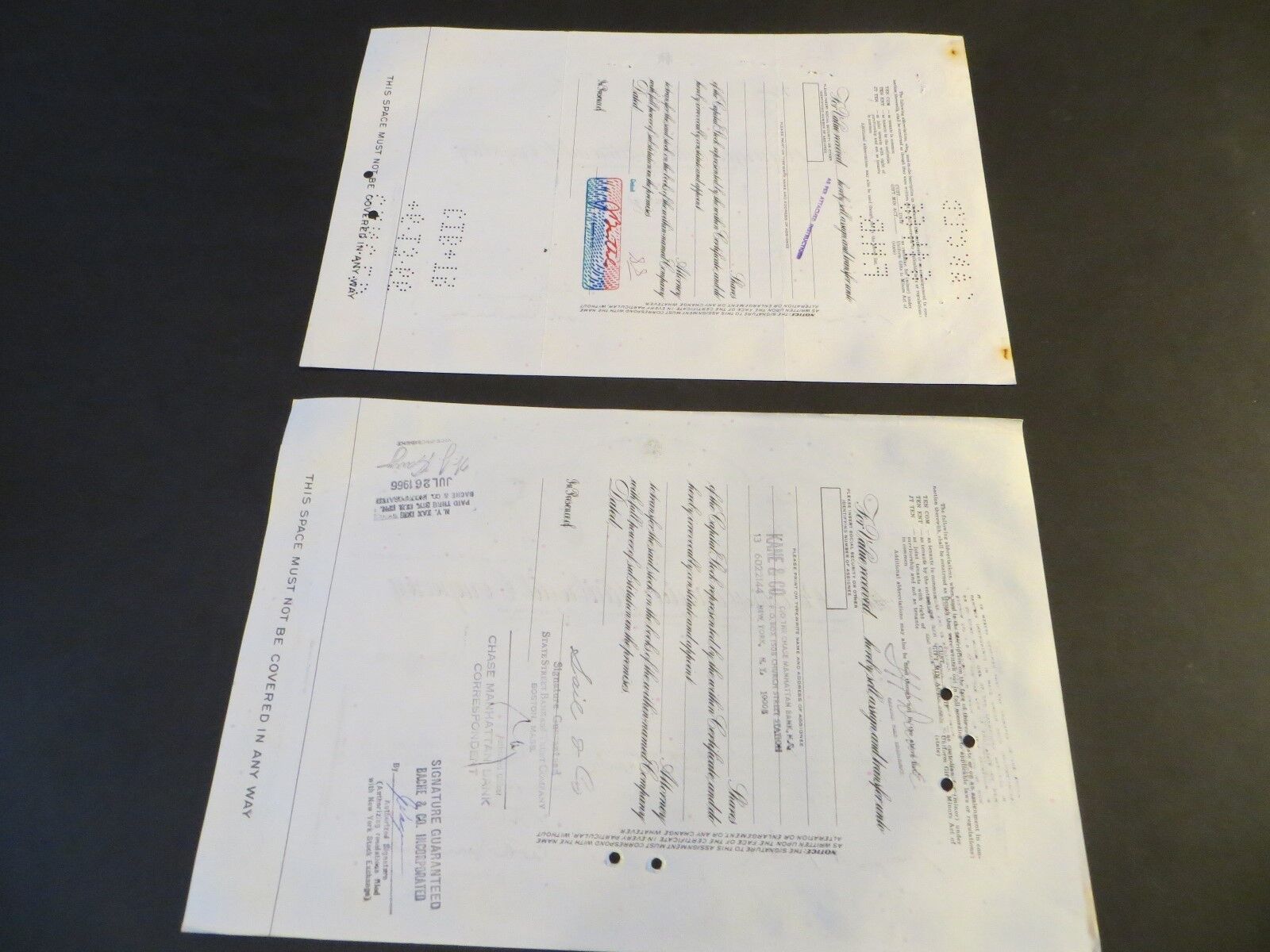 ca. 1960s Gorgeous and Crisp Certificates each with the beautiful engaving of the famous horseshoe curve. The Pennsylvania Railroad (reporting mark PRR) was an American railroad, founded in 1846. Commonly referred to as the "Pennsy", the PRR was headquartered in Philadelphia, Pennsylvania. The PRR was the largest railroad by traffic and revenue in the U.S. throughout the first two-thirds of the twentieth century and was at one time the largest publicly traded corporation in the world. At its peak, it controlled about 10,000 miles (16,000 km) of rail line. During its history, the PRR merged with or had an interest in at least 800 other rail lines and companies. The corporation still holds the record for the longest continuous dividend history: it paid out annual dividends to shareholders for more than 100 years in a row. At one point the budget for the PRR was larger than that of the U.S. government; at its peak it employed about 250,000 workers. In 1968, the Pennsylvania Railroad merged with its rival, the New York Central Railroad, to form the Penn Central Transportation Company. The Interstate Commerce Commission required that the ailing New York, New Haven and Hartford Railroad be added in 1969. A series of events including inflation, poor management, abnormally harsh weather and the withdrawal of a government-guaranteed $200-million operating loan forced the Penn Central to file for bankruptcy protection on June 21, 1970. The viable parts of the Penn Central system were transferred in 1976 to Conrail, which began earning a profit in 1981. The Norfolk Southern Railway and CSX Transportation split Conrail in approximately equal portions in 1999, with the former now owning the old Pennsy Main Line across Pennsylvania. The Pennsylvania Railroad's corporate symbol was the keystone, which is Pennsylvania's state symbol, with the letters PRR intertwined inside. When colored, it was bright red with a silver-grey inline and lettering. Additional Information: These are cancelled stock certificates. Do not wonder if the certificates have been cropped or trimmed; they have not been. They have the complete edges, as issued. There are various cancellation marks and vertical file folds from being placed in a safety deposit box. Since I had several pairs of these when I made this listing, the certificates that you will receive will be of the same exact design as photographed, but will not be the exact certificate spictured. Yours may be for a different quantity of shares and/or a different stockholder. Your certificates may also have different cancellation markings. Terms and Conditions: FREE POSTAL SERVICE FIRST CLASS MAIL SHIPPING to the United States. Uninsured International, including Canada, shipments are $6.00. I have been a member of the American Philatelic Society since 1978 and have been selling on eBay for years. Virginia buyers must pay our Governor's 5.3% sales tax unless you email a PDF of your resale certificate within 24 hours of the end of the auction. Buy with trust and confidence. I will work to make you happy. Thank you for taking the time to view my items. Powered by eBay Turbo Lister The free listing tool. List your items fast and easy and manage your active items.