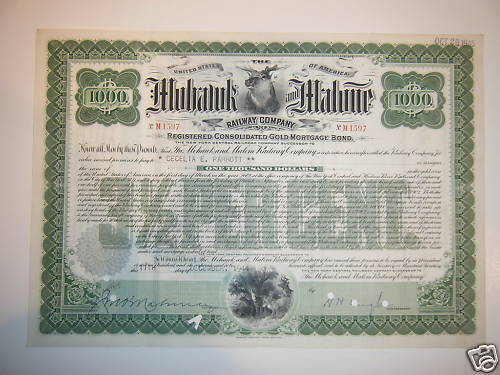 Very Fresh $1,000 Bond, issued and cancelled with a beautiful deer head design, ca. 1944. Dr. William Seward Webb's Mohawk and Malone Railway crossed the northern Adirondacks at Tupper Lake Junction, just north of Tupper Lake. Webb was president of the Wagner Palace Car Company. He began by purchasing the narrow gauge Herkimer, Newport and Poland Railroad, which ran 16 miles from Herkimer to Poland, converting its trackage to standard gauge and straightening it to avoid multiple crossings of the West Canada Creek. He then had track built from Tupper Lake to Moira and thence to Montreal. This was called variously the Adirondack and St. Lawrence Railroad and the Mohawk and Malone. After 1893, it was controlled by the New York Central and Hudson River Railroad. It opened in 1892 from Malone Junction to Childwold Station with a branch from Lake Clear Junction to Saranac Lake. In 1913, it merged with the New York Central and Hudson River Railroad as the "Adirondack Division". The railway was abandoned until 1992 when restoration began with a short, 4-mile section from Thendara to Minnehaha, New York. The section was approved and was demonstrated that year on Independence Day. At this time, it was called the Adirondack Centennial Railroad. In 1994, after gaining popularity, it was renamed the Adirondack Scenic Railroad, and has run under that name every year since. The Adirondack Scenic Railroad (reporting mark ADIX) is a tourist railway located in Adirondack Park that runs during the summer months from Utica to Thendara, and from Saranac Lake to Lake Placid. During the Winter, the entire line (including the Saranac Lake to Old Forge section) is used as a snowmobile trail. The Adirondack Scenic Railroad is now operating over 70 miles of track and has inspired the restoration of historic stations in Holland Patent, Remsen and Tupper Lake. There are plans to extend operations through to Tupper Lake. The line is not used for any freight traffic. Additional Information: This is a cancelled $1,000 Mortgage Bond. You may purchase more than one, as I am a wholesaler of this particular item. Just change the quantity that you wish to purchase. If you wish to purchase more than just a few of this particular item, please e-mail me to discuss special pricing. I often sell in bulk to attorneys, CPAs, interior decorators, architects and gift shops. I have also sold to marketing companies to use in non-profits. If you are a non-profit (such as a museum or foundation) and have a special connection to the particular issuing entity, I would especially love to speak with you about becoming a supplier for your gift shop. The particular certificate that you will receive will be of the same exact design as photographed, but will not be the exact certificate pictured. Yours may be for a different quantity of shares and/or a different stockholder. Your certificate may also have different cancellation markings. Terms and Conditions: FREE POSTAL SERVICE FIRST CLASS MAIL SHIPPING to the United States. Uninsured International, including Canada, shipments are $4.00. Postal insurance and/or registered mail for loss and/or damage protection would be extra and offered only if requested. All international shipments that request insurance and registered mail will be charged $14 for this service. I have been a member of the American Philatelic Society since 1978 and have been selling on eBay for years. Virginia buyers must pay our Governor's 5% sales tax unless you email a PDF of your resale certificate within 24 hours of the end of the auction. Buy with trust and confidence. I will work to make you happy. Thank you for taking the time to view my items. Powered by eBay Turbo Lister The free listing tool. List your items fast and easy and manage your active items.