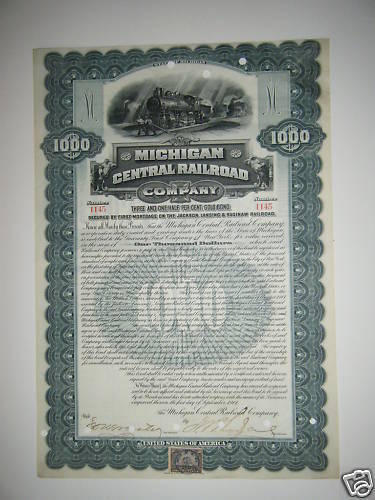 Very Crisp and Fresh $1,000 Verticle Format Gold Bond with a beautiful locomotive design, ca 1901. This bond has the 50 cent Battleship revenue stamp in the center of the bottom, making for a beautiful combination. The stamp is cancelled with the handstamp of the company. The Michigan Central Railroad (reporting mark MC) was originally incorporated in 1846 to establish rail service between Detroit, Michigan and St. Joseph, Michigan. The railroad later operated in the states of Michigan, Indiana, and Illinois in the United States, and the province of Ontario in Canada. Starting in about 1867, the railroad was operated as part of the New York Central Railroad, which later became part of Penn Central and then Conrail. With the 1998 Conrail breakup, Norfolk Southern now owns much of the former Michigan Central trackage. Prior to the automobile, Michigan Central was mostly a carrier of natural resources. Michigan had extensive reserves of timber at the time, and the Michigan Central owned lines from east to west of the state and north to south, tapping all resources available. After the advent of the automobile as one of the most dominant forces of commerce ever seen by the world, with Detroit at the epicenter, the Michigan Central became a carrier of autos and auto-related parts. The Michigan Central was one of the few Michigan railroads with a direct line into Chicago, meaning it did not have to operate cross-lake ferries, as did virtually all other railroads operating in Michigan, such as the Pere Marquette, Pennsylvania, Grand Trunk, and Ann Arbor Railroads. Michigan Central was part owner of the ferry service operated to the Upper Peninsula as well as cross-river ferry service to Ontario, but these routes did not exist to circumvent Chicago. The Michigan Central Railroad operated passenger trains between Chicago and Detroit mostly. These trains ranged from locals to the Wolverine. Some trains were forwarded over the Canada Southern Railroad to Buffalo and New York City. While Michigan Central was an independent subsidiary of the New York Central System, passenger trains were staged from Illinois Central's Central Station as a tenant. When MC was formally merged into NYC in the 1950s, trains were re-deployed to NYC's LaSalle Street Station home, where other NYC trains such as the 20th Century Limited were staged. IC sued for breach of contract and won because the MC had a lease that ran for a few more years. The MC route to Porter, Indiana, is now mostly gone. The Kensington Interchange, shared with the South Shore Line, was cut out. These tracks now belong to Indiana Harbor Belt Railroad, and are overgrown stub tracks ending short of the interchange. Amtrak trains serving the Michigan Central Detroit line now use the former NYC to Porter, where they turn north on Michigan Central. Passenger equipment was mostly similar to that of parent New York Central System. Typically this meant a EMD E-series locomotive and Pullman-Standard lightweight rolling stock. Because General Motors was a large customer of Michigan Central, use of Alco or General Electric locomotives was less common. Additional Information: This is a cancelled $1,000 Mortgage Bond. You may purchase more than one, as I am a wholesaler of this particular item. Just change the quantity that you wish to purchase. If you wish to purchase more than just a few of this particular item, please e-mail me to discuss special pricing. I often sell in bulk to attorneys, CPAs, interior decorators, architects and gift shops. I have also sold to marketing companies to use in non-profits. If you are a non-profit (such as a museum or foundation) and have a special connection to the particular issuing entity, I would especially love to speak with you about becoming a supplier for your gift shop. The particular certificate that you will receive will be of the same exact design as photographed, but will not be the exact certificate pictured. Yours may be for a different quantity of shares and/or a different stockholder. Your certificate may also have different cancellation markings. Terms and Conditions: FREE POSTAL SERVICE FIRST CLASS MAIL SHIPPING to the United States. Uninsured International, including Canada, shipments are $4.00. Postal insurance and/or registered mail for loss and/or damage protection would be extra and offered only if requested. All international shipments that request insurance and registered mail will be charged $14 for this service. I cannot be responsible for loss or damage for uninsured packages, domestic or international. I have been a member of the American Philatelic Society since 1978 and have been selling on eBay for years. Virginia buyers must pay our Governor's 5% sales tax unless you email a PDF of your resale certificate within 24 hours of the end of the auction. Buy with trust and confidence. I will work to make you happy. Thank you for taking the time to view my items. Powered by eBay Turbo Lister The free listing tool. List your items fast and easy and manage your active items.