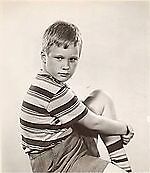 RARE!! Jamie aired live in black and white on ABC at 7:30 pm Monday and starred Brandon De Wilde, as Jamie, a 7 year-old whose parents had recently died and found himself with no place to unpack his suitcase. Moved from relative to relative, he finally arrives at the home of Aunt Laurie. There he takes on the persona of a modern day Tom Sawyer. He immediately bonds with Grandpa, another forgotten soul, and they share in a number of "adventures" together. Also starred Ernest Truex as Grandpa, Polly Rowles as Aunt Laurie and Kathleen Nolan as cousin Liz. No fancy packaging or menus. This is one episode of this forgotten series on DVD-R in a CD sleeve. BONUS: Included will be the What's My Line segment with Brandon trying to stump the panel. This is a kinescope version but highly watchable. This video content is in the public domain.