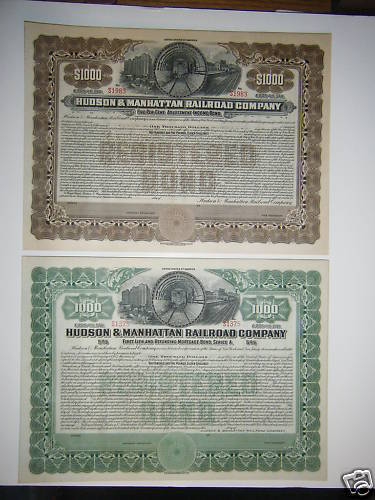 Very Crisp and Fresh pair of $1,000 unissued bonds with a beautiful design showing a streetcar/subcar in a tunnel. You will receive one brown and one green. The history of PATH, originally known as the Hudson and Manhattan Railroad, predates the first underground line of the New York City Subway (the IRT). Although the railroad was first planned in 1874, existing technologies could not safely tunnel under the Hudson River. Construction began on the existing tunnels in 1890, but stopped shortly thereafter when funding ran out. Construction did not resume until 1900 under the direction of William Gibbs McAdoo, an ambitious young lawyer who had moved to New York from Chattanooga, Tennessee. McAdoo would later become president of what would, for many years, be known as the H&M, Hudson Tubes or McAdoo Tunnels. The first trains ran in 1907 and revenue service started between Hoboken and 19th Street at midnight on February 26, 1908. On July 19, 1909, service began between Lower Manhattan and Jersey City, through a set of tunnels located about 1¼ miles (2 km) south of the first pair. After the completion of the uptown Manhattan extension to 33rd Street and the westward extension to Newark and the now-defunct Manhattan Transfer in 1911, the Hudson and Manhattan Railroad was considered to be complete. The cost of the entire project was estimated at between $55 and $60 million, equal to more than $1 billion in present-day dollars. Originally, the Hudson Tubes were designed to link the major railroad stations in New Jersey — the Lackawanna station in Hoboken, the Erie and PRR stations in Jersey City — with New York City. While it still provides a connection to train stations in Hoboken and Newark, the commuter train stations at Erie (now Pavonia-Newport) and Exchange Place (the PRR station) have since closed down. Towards the end of the 20th century the old rail yards at Pavonia and Exchange Place were replaced with large-scale office, residential, and retail developments The first tunnel (the northernmost of the uptown pair) was originally built without an excavation shield or iron construction because the chief engineer of the time, Dewitt Haskin, believed that the river silt was strong enough to maintain the tunnel's form (with the help of compressed air) until a 2 1/2 foot (76 cm) thick brick lining could be constructed. Haskins' plan was to excavate the tunnel, then fill it with compressed air to expel the water and to hold the iron plate lining in place. They succeeded in building the tunnel out by approximately 1,200 feet (366 m) from Jersey City until a series of blowouts — including a particularly serious one in 1880 that took the lives of 20 workers — ended the project. When the New York and Jersey Tunnel Company resumed construction on the tunnels in 1902, they employed a different method of tunneling using tubular cast iron plating. An enormous mechanical shield was pushed through the silt at the bottom of the river. The displaced mud would then be placed into a chamber, where it would later be shoveled into small cars that hauled it to the surface. In some cases, the silt would be baked with kerosene torches to facilitate easier removal of the mud. The southernmost tunnel of the uptown pair, as well as the downtown tunnels, were all constructed using the tubular cast iron method. The tunnels are separate for each track, which enables a better ventilation by so-called piston effect. When a train passes through the tunnel it pushes out the air in front of it toward the closest ventilation shaft it front, and "sucks-in" the air to the tunnel from the closest ventilation shaft behind it. The tunnels in Manhattan, on the other hand, employed cut and cover construction methods. Additional Information: This is a PAIR of unissued Mortgage Bonds. You may purchase more than one pair, as I am a wholesaler of this particular item. Just change the quantity that you wish to purchase. If you wish to purchase more than just a few of this particular item, please e-mail me to discuss special pricing. I often sell in bulk to attorneys, CPAs, interior decorators, architects and gift shops. I have also sold to marketing companies to use in non-profits. If you are a non-profit (such as a museum or foundation) and have a special connection to the particular issuing entity, I would especially love to speak with you about becoming a supplier for your gift shop. The particular certificate that you will receive will be of the same exact design as photographed, but will not be the exact certificate pictured. Yours may be for a different quantity of shares and/or a different stockholder. Your certificate may also have different cancellation markings. Terms and Conditions: FREE POSTAL SERVICE FIRST CLASS MAIL SHIPPING to the United States. Uninsured International, including Canada, shipments are $8.00. All international shipments that request insurance and registered mail will be charged $14 for this service. I have been a member of the American Philatelic Society since 1978 and have been selling on eBay for years. Virginia buyers must pay our Governor's 5% sales tax unless you email a PDF of your resale certificate within 24 hours of the end of the auction. Buy with trust and confidence. I will work to make you happy. Thank you for taking the time to view my items. Powered by eBay Turbo Lister The free listing tool. List your items fast and easy and manage your active items.