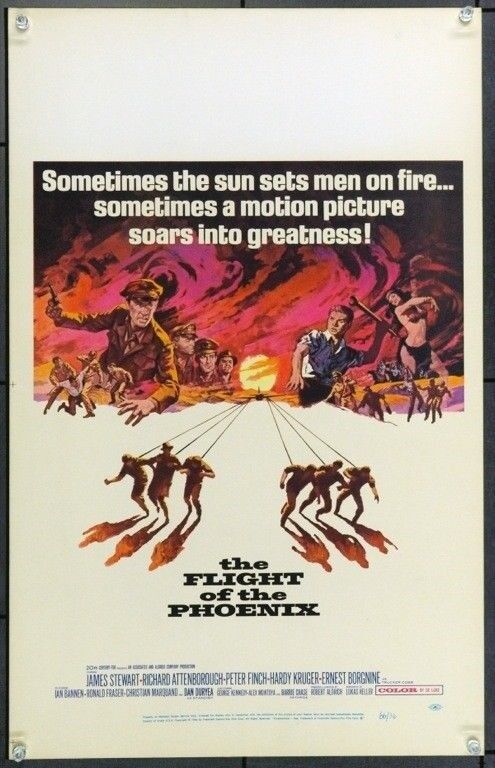 Original 20th Century-Fox Window Card (14x22). Unfolded. Very Fine. Original 20th Century-Fox Window Card (14x22) for the Robert Aldrich survival adventure, THE FLIGHT OF THE PHOENIX (1965) starring James Stewart, Richard Attenborough, Peter Finch, Hardy Kruger, and Ian Bannen. The film tells the story of a cargo plane that goes down during a sandstorm in the Sahara with less than a dozen men on board. One of the passengers is a German airplane designer (model airplanes as the rest of the crew finds out later) who comes up with a scheme to build a flyable plane from the wreckage before the men run out of food and water. The film was nominated for two Oscars: Best Editing and Best Supporting Actor for Bannen. This original window card is unfolded and in very fine condition. James Stewart - Actor SIR RICHARD ATTENBOROUGH - Actor Peter Finch - Actor ROBERT ALDRICH - Director Ernest Borgnine - Actor Dan Duryea - Actor George Kennedy - Actor Ian Bannen - Actor Ronald Fraser - Actor Hardy Kruger - Actor Gabriele Tinti - Actor Listing and template services provided by inkFrog