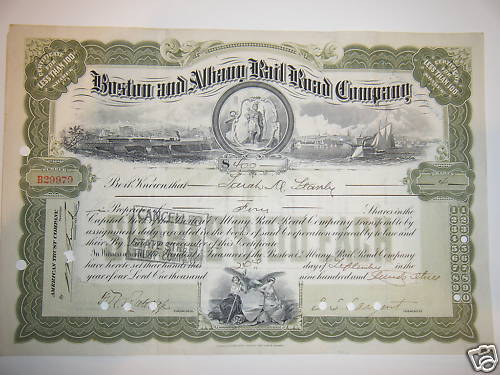 Beautiful cancelled green certificate ca. 1920s/30s. The Boston and Albany Railroad (reporting mark BA) was a railroad connecting Boston, Massachusetts to Albany, New York, later becoming part of the New York Central Railroad system. Passenger service is still operated on the line by Amtrak (as part of their Lake Shore Limited), and the MBTA Commuter Rail system uses the section east of Worcester as their Framingham/Worcester Line. In 1883, the B&A acquired track then owned by the New York and New England Railroad as far as Newton Highlands, and in 1884, began the construction of a line northwest to the B&A mainline creating a commuter loop. "The Circuit," as this route was called, officially opened in May 1886 providing double-track operation from downtown Boston through Brookline to Newton Highlands, then north into Riverside and four tracks on the mainline from Riverside back to downtown so that commuter and mainline operations did not conflict. By 1889 as many as 35 trains traveled the Circuit daily, providing superior commuter service. In 1899, the new South Station union station opened in Boston, a few blocks northeast of the old terminal. That terminal had been located on the west side of Utica Street, from Kneeland Street south to a bit past Harvard Street, now part of the South Bay Interchange. Even earlier, the terminal was in the block bounded by Kneeland Street, Beach Street, Albany Street (now Surface Artery) and Lincoln Street (which later became a freight house). By the early part of the 20th century, commuter rail service was provided east of Worcester, with intercity rail continuing on west. The intercity trips were taken over by Amtrak on May 1, 1971, and on January 27, 1973 the MBTA acquired the line east of Framingham. Service beyond Framingham was discontinued October 27, 1975, as the state did not subsidize it. Conrail took over Penn Central on April 1, 1976. On September 26, 1994, some rush hour trains started to serve Worcester on Conrail trackage (which became CSX trackage on June 1, 1999), extending to other times beginning on December 14, 1996. Since 1959, the former "Circuit" line, later called the Highland Branch, has been used as the grade-separated right-of-way of the light rail Green Line "D" Branch operated by the MBTA. The Boston Subdivision of CSX retains rights to use certain MBTA-owned track. Additional Information: This is a cancelled stock certificate. You may purchase more than one, as I am a wholesaler of this particular item. Just change the quantity that you wish to purchase. If you wish to purchase more than just a few of this particular item, please contact me to discuss special pricing. I often sell in bulk to attorneys, CPAs, interior decorators, architects and gift shops. I have also sold to marketing companies to use in non-profits. If you are a non-profit (such as a museum or foundation) and have a special connection to the particular issuing entity, I would especially love to speak with you about becoming a supplier for your gift shop. The particular certificate that you will receive will be of the same exact design as photographed, but will not be the exact certificate pictured. Yours may be for a different quantity of shares and/or a different stockholder. Your certificate may also have different cancellation markings. Terms and Conditions: FREE POSTAL SERVICE FIRST CLASS MAIL SHIPPING to the United States. Uninsured International, including Canada, shipments are $4.00. Postal insurance and/or registered mail for loss and/or damage protection would be extra and offered only if requested. All international shipments that request insurance and registered mail will be charged $14 for this service. I cannot be responsible for loss or damage for uninsured packages, domestic or international. I have been a member of the American Philatelic Society since 1978 and have been selling on eBay for years. Virginia buyers must pay our Governor's 5% sales tax unless you email a PDF of your resale certificate within 24 hours of the end of the auction. Buy with trust and confidence. I will work to make you happy. Thank you for taking the time to view my items.