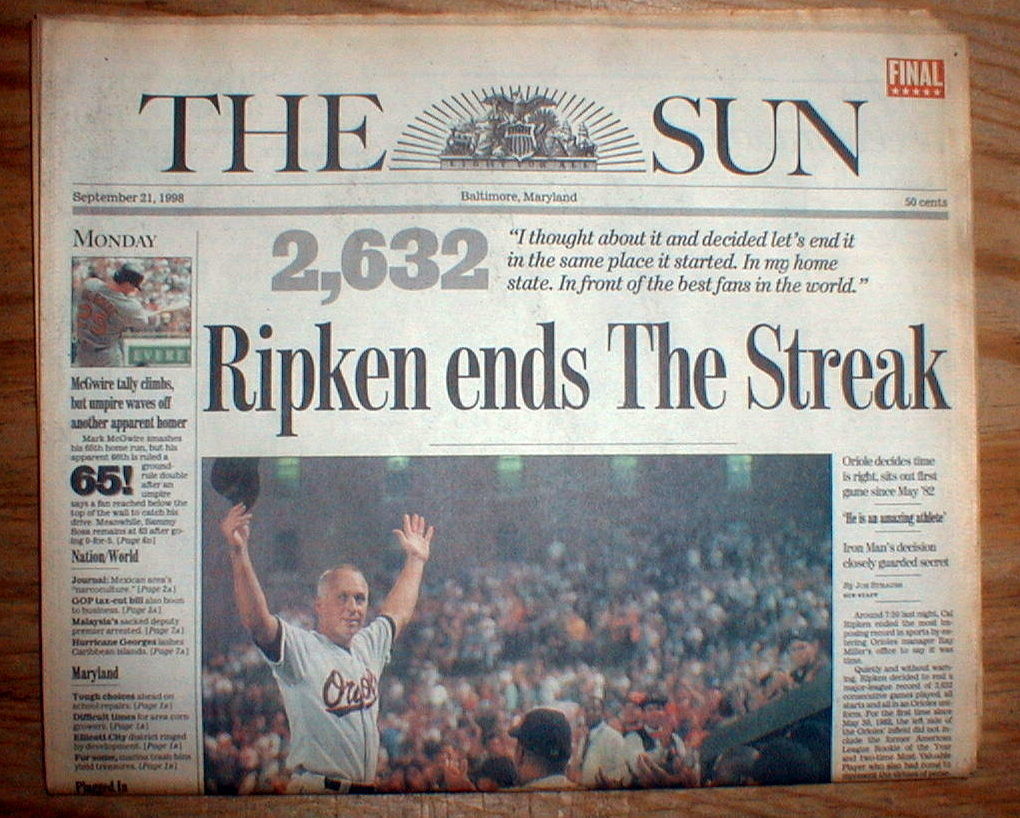 BEST 1998 Baltimore MARYLAND newspaper CAL RIPKEN Consecutive Game Record streak ends at 2632 - inv # pict Mar2014X18 SEE PHOTO----- COMPLETE, ORIGINAL NEWSPAPER, the Baltimore Sun (MD) dated Sept 21, 1998. This newspaper contains the BEST display headlines (in Cal Ripken's home town newspaper, no less) with the end of the "streak" of consecutive Major League baseball games played. Ripken played his entire career for the Baltimore Orioles and this set the new Major League standard for the tile of the "Iron man." Calvin Edwin "Cal" Ripken, Jr. (born August 24, 1960), nicknamed "The Iron man", is an American former baseball shortstop and third baseman who played 21 years in Major League Baseball (MLB) for the Baltimore Orioles (1981–2001). A 19-time All-Star and two-time American League (AL) Most Valuable Player (MVP), Ripken is best remembered for breaking Lou Gehrig's record for consecutive games played, a record that had stood for 56 years and many deemed unbreakable. Ripken surpassed the mark on September 6, 1995, by playing his 2,131st consecutive game. Born in Maryland, Ripken grew up travelling around the United States as his father, Cal, Sr., was a player and coach in the Orioles' system. After a fine career at Aberdeen High School, Ripken was drafted in the second round of the 1978 Major League Baseball Draft. He reached the major leagues in 1981 with the Orioles, with whom he would play his entire career. Ripken voluntarily ended his 17-year streak at 2,632 games in 1998. One of his position's most offensively productive players, Ripken tallied 3,184 hits, 431 home runs, and 1,695 runs batted in during his career, and he won two Gold Glove Awards for his defense. Ripken is considered one of the best shortstops and third basemen in baseball history. At 6 ft 4 in (1.93 m), 225 lb. (102.27 kg), he pioneered the way for the success of taller, larger shortstops. He is a member of the 3,000 hit club and holds the record for most home runs by a shortstop. He was elected into the National Baseball Hall of Fame in 2007. Very good condition. This listing includes original newspaper, NOT just a clipping or a page of it. STEPHEN A. GOLDMAN HISTORICAL NEWSPAPERS stands behind all of the items that we sell with a no questions asked, money back guarantee. Every item we sell is an original newspaper printed on the date indicated at the beginning of its description. U.S. buyers pay priority mail postage which includes waterproof plastic and a heavy cardboard flat to protect your purchase from damage in the mail. International postage is quoted when we are informed as to where the package is to be sent. We do combine postage (to reduce postage costs) for multiple purchases sent in the same package. We accept payment by PAYPAL as well as by CREDIT CARD (Visa and Master Card). We list thousands of rare newspapers with dates from 1570 through 2004 on Ebay each week. This is truly SIX CENTURIES OF HISTORY that YOU CAN OWN! Stephen A. Goldman Historical Newspapers has been in the business of buying and selling historical newspapers for over 45 years. Dr. Goldman is a consultant to the Freedom Forum Newseum and a member of the American Antiquarian Society. You can buy with confidence from us, knowing that we stand behind all of our historical items with a 100% money back guarantee. Let our 45+ years of experience work for YOU ! We have hundreds of thousands of historical newspapers (and their very early precursors) for sale.