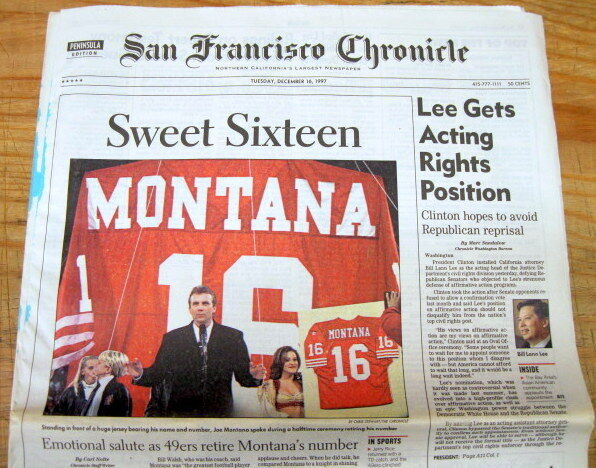 BEST 1997 newspaper - SAN FRANCISCO 49ers retire JOE MONTANA # 16 + JERRY RICE stars as the Forty-niners go to the NFL playoffs - inv # 1M-203 SEE PHOTO----- COMPLETE, ORIGINAL NEWSPAPER, the San Francisco Chronicle (CA) dated Dec 16, 1997. This newspaper contains the BEST display and headlines of the San Francisco 49ers retiring JOE MONTANA 's uniform number (# 16). There is also great coverage of the 49ers defeating the Denver Broncos to go on to the 1997 NFL playoffs. Star receiver Jerry Rice stared in the game but was re-injured and could not play in the playoffs. Joseph Clifford Montana Jr. (born June 11, 1956 is a former American football quarterback who played in the National Football League (NFL) for 16 seasons, primarily with the San Francisco 49ers. Montana started his NFL career in 1979 with San Francisco, where he played for the next 14 seasons. While a member of the 49ers, Montana started and won four Super Bowls and was the first player ever to have been named Super Bowl Most Valuable Player three times. He also holds Super Bowl career records for most passes without an interception (122 in 4 games) and the all-time highest quarterback rating of 127.8. Montana was elected to the Pro Football Hall of Fame in 2000, his first year of eligibility. The 49ers retired the number 16, the jersey number Montana wore while with the team. The 1997 San Francisco 49ers season was the team's 48th year with the National Football League. The franchise appeared in the NFC Championship Game for the fifth time in the 1990s. This season marked their last appearance in the NFC title game until the 2011 season. The team's playoff run was ended by the Green Bay Packers for the third straight year. Toward the end of the season, things appeared to be going well for the team's postseason prospects. However, in the second to last game of the season, Rice was injured again and deemed out for the playoffs. Similarly, the team's offensive heart for the season, running back Garrison Hearst, had a broken collar bone through the post season and didn't return to full health prior to the end of the season. Despite not having either their leading receiver or their starting running back, the 49ers were able to make it to their 7th NFC championship in 10 years. However, not having an elite receiver or solid running back showed glaringly in their loss to the Packers in the conference championship (Hearst returned, but his injury was clearly still a problem as he only played a few ineffective snaps). Jerry Lee Rice (born October 13, 1962) is a former American football wide receiver who played 20 seasons in the National Football League (NFL), primarily with the San Francisco 49ers. He is widely considered to be the greatest wide receiver in NFL history and among the greatest NFL players overall. During the 49ers' opening game of the 1997 season, he tore the anterior cruciate and medial collateral ligaments in his left knee on a reverse. Warren Sapp of the Tampa Bay Buccaneers grabbed Rice by the face-mask and wrenched him to the ground with it, drawing a 15-yard personal foul. The injury broke his streak of 189 consecutive games played. Fourteen weeks later, he made his return, much earlier than doctors wanted him to. He scored a touchdown, but when he came down with the catch, he cracked the patella in his left kneecap. He was forced to miss the Pro Bowl for the first time in 11 years. However, he made a full recovery, coming back to record 82 catches for 1,157 yards and 9 touchdowns in 1998 and being named to his 12th Pro Bowl. Excellent condition. This listing includes the complete entire original newspaper, NOT just a clipping or a page of it. STEPHEN A. GOLDMAN HISTORICAL NEWSPAPERS stands behind all of the items that we sell with a no questions asked, money back guarantee. Every item we sell is an original newspaper printed on the date indicated at the beginning of its description. U.S. buyers pay priority mail postage which includes waterproof plastic and a heavy cardboard flat to protect your purchase from damage in the mail. International postage is quoted when we are informed as to where the package is to be sent. We do combine postage (to reduce postage costs) for multiple purchases sent in the same package. We accept payment by PAYPAL as well as by CREDIT CARD (Visa and Master Card). We list thousands of rare newspapers with dates from 1570 through 2004 on Ebay each week. This is truly SIX CENTURIES OF HISTORY that YOU CAN OWN! Stephen A. Goldman Historical Newspapers has been in the business of buying and selling historical newspapers for over 45 years. Dr. Goldman is a consultant to the Freedom Forum Newseum and a member of the American Antiquarian Society. You can buy with confidence from us, knowing that we stand behind all of our historical items with a 100% money back guarantee. Let our 45+ years of experience work for YOU ! We have hundreds of thousands of historical newspapers (and their very early precursors) for sale.