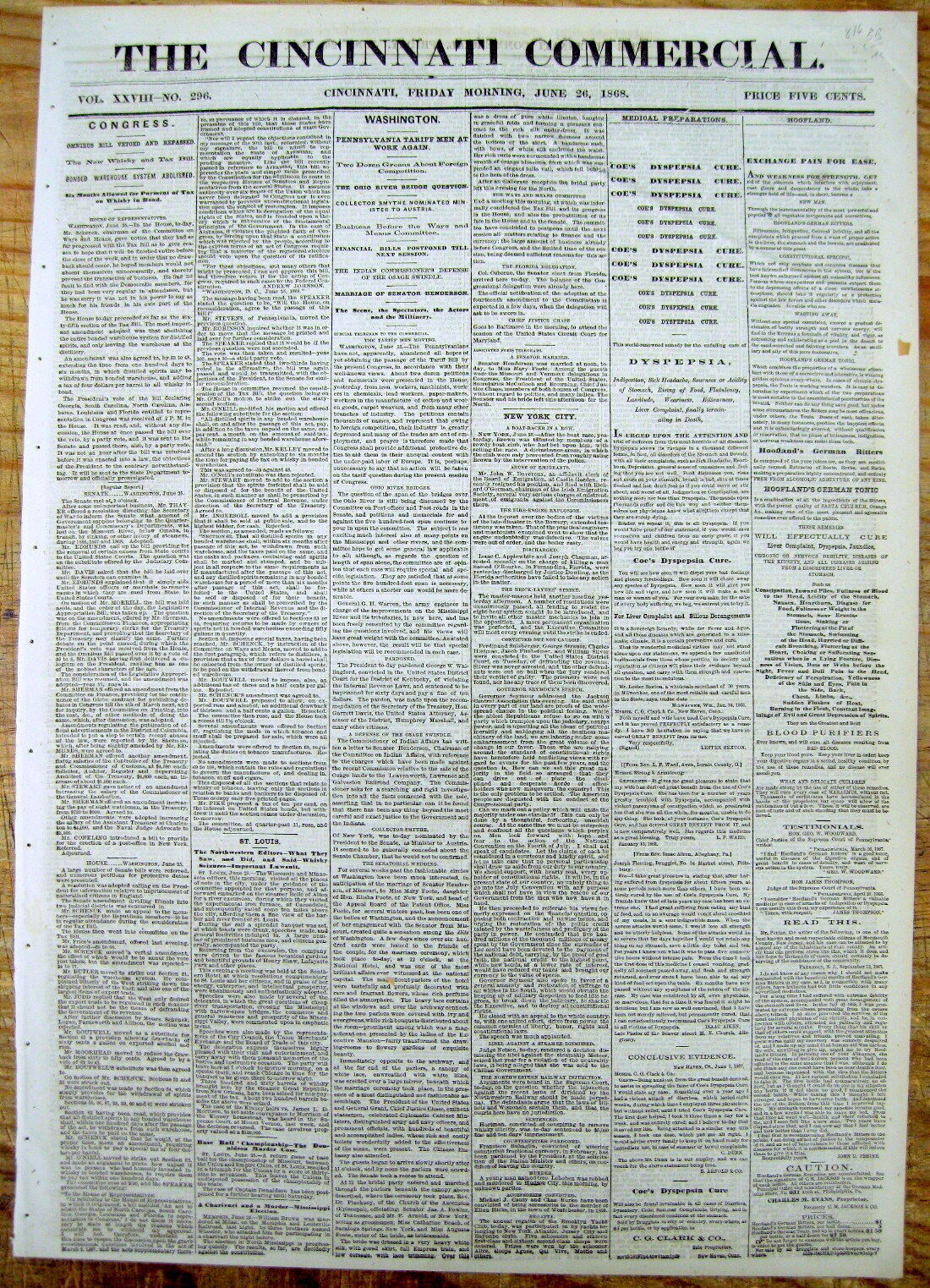 BEST 1868 newspaper with one of the EARLIEST ADs for a PROFESIONAL baseball team - The CINCINNATI RED STOCKINGS - inv # 9D-231 Please visit our EBAY STORE for THOUSANDS of HISTORICAL NEWSPAPERS on sale or at auction. SEE PHOTO----- COMPLETE, ORIGINAL NEWSPAPER, the Cincinnati Commercial (OH) dated June 26, 1868. This newspaper contains a back page ad for the CINCINNATI RED STOCKINGS baseball game. The Cincinnat Red Stockings wer the first PROFESSIONAL BASEBALL TEAM !! Very early ad for the first Professional baseball team. The Cincinnati Red Stockings of 1869 were baseball's first openly all-professional team, with ten salaried players. The Cincinnati Base Ball Club formed in 1866 and fielded competitive teams in the National Association of Base Ball Players (NABBP) 1867–1870, a time of a transition that ambitious Cincinnati, Ohio businessmen and English-born ballplayer Harry Wright shaped as much as anyone. Major League Baseball recognized those events officially by sponsoring a centennial of professional baseball in 1969. Thanks partly to their on-field success and the continental scope of their tours, the Red Stockings established styles in team uniforms and team nicknames that have some currency even in the 21st century. They also established a particular color, red, as the color of Cincinnati, and they provide the ultimate origin for the use of "Red Sox" in Boston. The Cincinnati Base Ball Club, or simply Cincinnati Club, was established July 23, 1866 at a downtown law office, drawing up a constitution and by-laws and electing officers including Alfred T. Goshorn, President. A few years later Goshorn earned international fame as Director-General of the (U.S.) Centennial Exposition held 1876 in Philadelphia. Founding member George B. Ellard also led the Union Cricket Club, and the relationship between them proved decisive for the baseball club's success. After playing four matches that summer, Cincinnati joined the NABBP for 1867 and concluded an agreement to play at the Union Cricket Club grounds (just west of Lincoln Park, a site now occupied by Cincinnati Museum Center at Union Terminal). George Ellard's son says that "a great number of the cricket club members" joined and so "the team was greatly strengthened and interest in baseball gained a new impetus." Plans for a new clubhouse and "more substantical" enclosing fence were approved in April and the commercial basis was approved in June: members of both clubs admitted free to all matches; otherwise "ten cents for home matches and twenty five cents for foreign matches. Ladies free." The team was soon nicknamed "Red Stockings" in reference to the main feature of the uniforms designed by Ellard; long stockings were then a novelty in team uniforms. Harry Wright had migrated from New York in 1866 for a job as "club pro" at the Union Cricket Club. Next year he picked up similar baseball duties, but the lingo is commonly stretched to call him a baseball "manager" from that time. His first team may have been local to a man, but he both developed and imported players to represent the club in competitive play for the 1868 season. The first team won 16 matches with regional opponents, losing only to the touring Nationals from Washington. As for most hosts on that tour, it was a "bad loss" on the scorecard but an instructive one for Cincinnati: the players, the club, the fans, and perhaps the local newspapers. Everyone learned advanced points of play and, from their different perspectives, witnessed the gulf in playing strength. About half of the 1868 Red Stockings were eastern imports, presumably compensated somehow. The two leading batsmen, John Hatfield and Fred Waterman arrived from the New York Mutuals, one of the strongest teams anywhere and another team pushing the bounds of the amateur code. Asa Brainard had been the Brooklyn Excelsiors' regular pitcher for four seasons, succeeded in 1867 by Candy Cummings. Catcher Doug Allison was from the Geary club of Philadelphia, one of the stronger clubs in that city. There was one local recruit, too, from the rival Buckeye club: Charlie Gould at first base. Harry Wright remained the first pitcher, sharing that position and second base with Brainard, and three other incumbents remained in the outfield and at shortstop. The 1868 team played a heavy schedule including a late eastern tour, once again dominating the western teams but losing seven of 43 matches in all. Very good condition. This listing includes the complete entire original newspaper, NOT just a clipping or a page of it. STEPHEN A. GOLDMAN HISTORICAL NEWSPAPERS stands behind all of the items that we sell with a no questions asked, money back guarantee. Every item we sell is an original newspaper printed on the date indicated at the beginning of its description. U.S. buyers pay priority mail postage which includes waterproof plastic and a heavy cardboard flat to protect your purchase from damage in the mail. International postage is quoted when we are informed as to where the package is to be sent. We do combine postage (to reduce postage costs) for multiple purchases sent in the same package. We accept payment by PAYPAL as well as by CREDIT CARD (Visa and Master Card). We list thousands of rare newspapers with dates from 1570 through 2004 on Ebay each week. This is truly SIX CENTURIES OF HISTORY that YOU CAN OWN! Stephen A. Goldman Historical Newspapers has been in the business of buying and selling historical newspapers for over 45 years. Dr. Goldman is a consultant to the Freedom Forum Newseum and a member of the American Antiquarian Society. You can buy with confidence from us, knowing that we stand behind all of our historical items with a 100% money back guarantee. Let our 45+ years of experience work for YOU ! We have hundreds of thousands of historical newspapers (and their very early precursors) for sale.