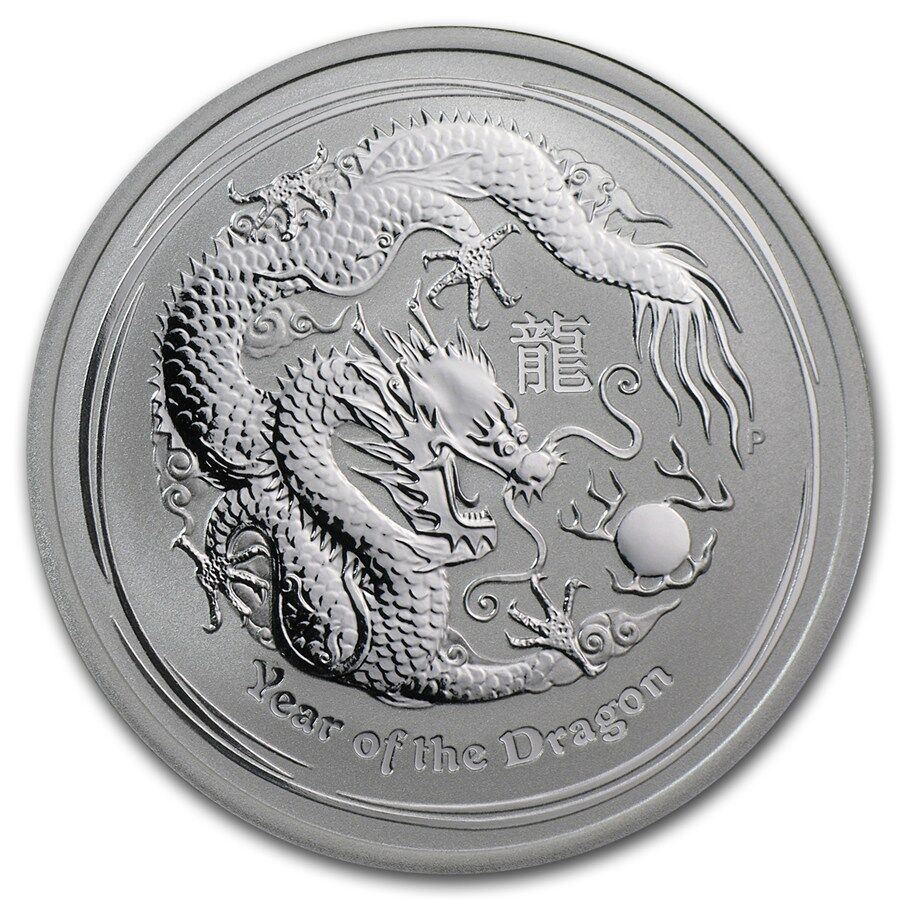 Celebrate the most auspicious Year of the Dragon with this large yet affordable one ounce, pure silver coin! Full, Original, Mint-Sealed Rolls Available - Please Inquire! In Stock and Ready for Immediate Shipment!SOLD OUT at the Perth Mint! This large, impressive coin represents a tremendous value, struck in pure silver! The Perth Mint's Lunar Zodiac Series II coins are huge! At more than 45 mm in diameter, they are nearly 2 inches across! This beauty is made all the more desirable by the Mint's execution of this intriguing animal motif in pure silver! The Perth Mint refers to this as their specimen finish. It's much nicer than an ordinary coin - the mirrored design is highlighted on frosted, matte fields (or background). We would therefore refer to this as a "Reverse Proof" or "Reverse Proof-Like" finish. Between the size and beauty of the finish, we think you'll be impressed with this affordable, pure silver dollar! Click here for other beautiful silver dollars! The Year of the Dragon - Most Powerful and Auspicious! Centuries ago, the Chinese invented a calendar based on the lunar (rather than the solar) cycle. There are twelve animals in the Chinese lunar zodiac, each corresponding in sequence to a year rather than a month. In 2012 we celebrate the Year of the Dragon. According to tradition, people born during a Year of the Rabbit (1904, 1916, 1928, 1940, 1952, 1964, 1976, 1988, 2000, and 2012) are said to exhibit that animal’s attributes. While Dragons frequently help others, rarely will they ask for help. Others are attracted to Dragons, especially their colorful personalities, but deep down, Dragons prefer to be alone. Perhaps that is because they’re most successful when working alone. Their preference to be alone can come across as arrogance or conceitedness, but these qualities aren't applicable. Dragons have tempers that can flare fast! They’re driven, unafraid of challenges, and willing to take risks. They’re passionate in all they do and they do things in grand fashion. This is the fifth annual release in the Lunar Zodiac Series II from Australia! Click here for the other Chinese Lunar Zodiac coins! The Dragon The Oriental or Chinese concept of the dragon is much different than the European notion of this beast. Whereas in the West dragons are nearly always evil, fire breathing creatures of immense size and destructiveness, in the East they are beloved. Chinese dragons are benevolent, representing most auspicious powers, particularly control over water, rainfall, and floods. In yin and yang terminology, a dragon is yang (male) and perfectly complements a yin (female) fenghuang, the mythical "Chinese phoenix". The dragon is a mystical being, able to use an almost unlimited range of magical or supernatural powers. It is able to disguise itself as a silkworm, or become as large as our entire universe. It can fly among the clouds or hide in water. It can form clouds, turn into water or fire, become invisible or glow in the dark. It is interesting to note that the Oriental dragon's ability to fly is a magical (not a physical) ability; unlike European dragons, Chinese dragons are rarely if ever depicted with physical wings. Historically, the dragon was the symbol of the Emperor of China. Many pictures of oriental dragons show a flaming pearl under their chin. The pearl is associated with wealth, good luck, and prosperity. In Chinese culture, the pearl also symbolizes perfection, which is only obtained through the highest forms of wisdom. As such, the pearl is retained in the clutches of the dragon, who, like the emperor, reveals great "pearls of wisdom" as it bestows abundance and prosperity upon its people. Click here for other beautiful silver dollars! Investment Note This coin features the most powerful and auspicious of all the animals in the Chinese Lunar Zodiac - the Dragon. The dragon is always the most popular animal, and always sells out. Previous Year of the Dragon coins now sell for many multiples of their issue prices. Don't delay, tame your dragon today! Click here for more coins featuring dragons! Obverse A rampaging, imperial Chinese dragon chases after the pearl of wisdom. The legend YEAR OF THE DRAGON defines the theme. The Chinese character for "Dragon" is to the right, while the Perth Mint's "P" mint mark is judiciously placed to the right, near the 3:00 position along the rim. Reverse The reverse features Her Majesty, Queen Elizabeth II of England, in crowned profile facing right. This portrait, featuring Her Majesty wearing a tiara and pearl earrings, was executed by the sculptor Ian Rank-Broadley. The legend 1 OZ 999 SILVER guarantees the weight and purity. The legend ELIZABETH II, the date and the denomination also appear. Click here for more great pure silver coins! Specifications Country Australia Mint Perth Mint of Australia Year of Issue 2012 Face Value One Dollar Weight 31.135 g Diameter 45.60 mm (nearly 2 inches!) Gauge (Thickness) 2.60 mm Mintage Limit 300,000 Finish Reverse Proof (Specimen or Bullion) Composition .999 Fine (Pure) Silver Edge Reeded (milled, serrated) Artist Ian Rank-Broadley (reverse) Packaging Encapsulated Talisman World Coins and Medals has been in business for more than 28 years and is one of the largest world coin direct distributors and wholesalers in the world. ANA Life Member. Copyright © 2018 Talisman World Coins and Medals. All Rights Reserved.