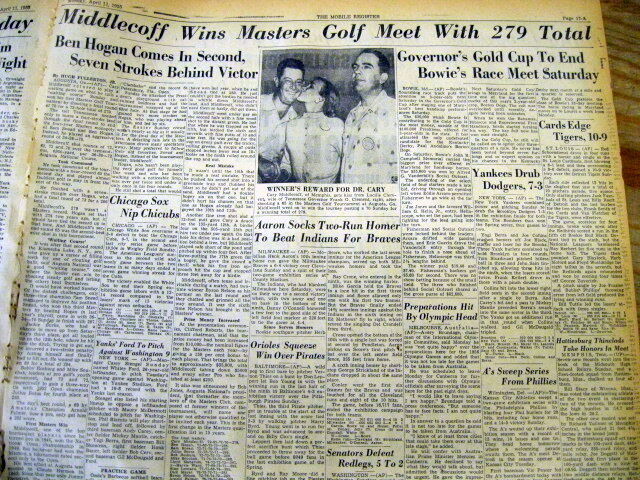 7 1955 newspapers MASTERS GOLF TOURNAMENT won by a dentist DR CARRY MIDDLECOFF - inv # BV-4E-123 SEE PHOTO----- Seven (7) COMPLETE, ORIGINAL consecutively dated NEWSPAPERs, the Mobile Register (Alabama) dated April 5-11, 1955. This lot of 7 newspapers contain coverage of the entire 1955 Masters Golf Tournament, which was won by Dr Cary Middlecoff (a dentist). This was also the first Masters Golf Tournament to be played in by ARNOLD PALMER (he finished tied for 10th place in it). The 1955 Masters Tournament was the 19th Masters Tournament, held April 7–10 at Augusta National Golf Club in Augusta, Georgia. It was the last one before CBS began televising the tournament the following year. Cary Middlecoff shot a 65 in the second round, including a then-record 31 on the first nine, to win his only Masters, seven strokes ahead of runner-up Ben Hogan, and the second of his three major championships. Emmett Cary Middlecoff (January 6, 1921 – September 1, 1998) was an American professional golfer on the PGA Tour from 1947 to 1961. His 40 Tour wins place him tenth all-time, and he won three major championships. Middlecoff graduated as a dentist from the Unversity of Tennessee Dental School, but gave up his practice at age 26 to become a full-time Tour golfer. After a third round at even-par 72, Middlecoff entered the final round with a four shot lead over Hogan, the champion in 1951 and 1953. The victory margin of seven strokes was a tournament record for ten years, until Jack Nicklaus won by nine strokes over Arnold Palmer and Gary Player in 1965, later increased to twelve in 1997 by Tiger Woods. The previous record was five strokes, set in 1948 by Claude Harmon and tied by Hogan in 1953. The runner-up finish was Hogan's fourth at the Masters. Arnold Palmer, a professional for less than a year, finished tied for tenth in his first Masters. Very good condition. This listing includes the 7 complete entire original newspapers, NOT just a clipping or a page of them. STEPHEN A. GOLDMAN HISTORICAL NEWSPAPERS stands behind all of the items that we sell with a no questions asked, money back guarantee. Every item we sell is an original newspaper printed on the date indicated at the beginning of its description. U.S. buyers pay priority mail postage which includes waterproof plastic and a heavy cardboard flat to protect your purchase from damage in the mail. International postage is quoted when we are informed as to where the package is to be sent. We do combine postage (to reduce postage costs) for multiple purchases sent in the same package. We accept payment by PAYPAL as well as by CREDIT CARD (Visa and Master Card). We list thousands of rare newspapers with dates from 1570 through 2004 on Ebay each week. This is truly SIX CENTURIES OF HISTORY that YOU CAN OWN! Stephen A. Goldman Historical Newspapers has been in the business of buying and selling historical newspapers for over 45 years. Dr. Goldman is a consultant to the Freedom Forum Newseum and a member of the American Antiquarian Society. You can buy with confidence from us, knowing that we stand behind all of our historical items with a 100% money back guarantee. Let our 45+ years of experience work for YOU ! We have hundreds of thousands of historical newspapers (and their very early precursors) for sale.