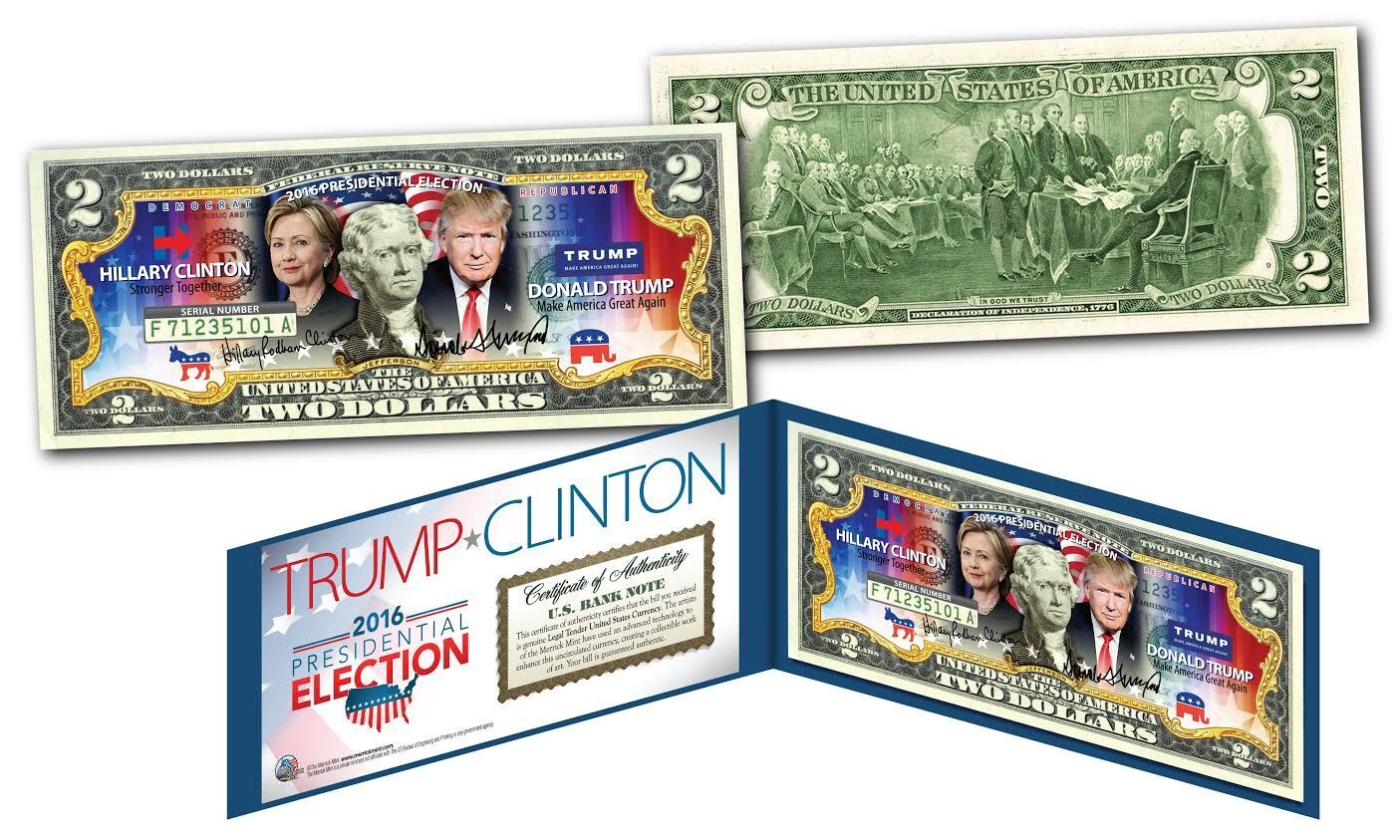 * HILLARY CLINTON * VS. * DONALD TRUMP * * 2016 Presidential Election "DUAL" Bill * Genuine Legal Tender U.S. $2 Bill Showcased in Blue 2-Sided Display Folio This 2016 Historic PRESIDENTIAL ELECTION Dual HILLARY CLINTON vs. DONALD TRUMP uncirculated $2 Bill is Genuine Authentic Legal Tender of the United States, which has been enhanced with beautiful colorized images. The full colorized images are accomplished through a revolutionary new authentic & genuine colorization process pioneered by The Merrick Mint. Included is a Certificate of Authenticity to guarantee that your bills are authentic and recognized by every monetary authority around the world, and assuring its Collector Edition status. Only genuine Legal Tender $2 United States Bills are used for this unique colorization process. Each $2 Bill is in FRESH, CRISP, UNCIRCULATED condition, and was directly removed from untouched wrapped Federal Reserve sealed packs. Former U.S. President Thomas Jefferson is featured on the obverse of the note, along with the special colorization overlay. The Signing of the Declaration of Independence by John Trumbull is featured on the reverse. It is the only U.S. Currency note that features two Presidents, John Adams and Thomas Jefferson, and it is one of the most rarely seen BILLS in circulation and actual use. HIGHLIGHTS: • Genuine U.S. Legal Tender. • First ever $2 DUAL bill featuring both Hillary Clinton & Donald Trump • Commemorates 2016 Historic Presidential Election • Features official slogans and facsimile signatures of each candidate • Donkey and Elephant famous Democrat & Republican logos are adorned on each bill • Highest Quality Colorization in the World, Accomplished Through a Revolutionary Technique. • Full-Color Certificate of Authenticity is Included with Each Bill. • Each Bill is Handsomely Showcased in Blue 2-Sided Display Folio. • Each Bill is in Fresh, Crisp, Uncirculated Condition. • A true collectible of American history • Satisfaction Guaranteed. Please note that these bills are GENUINE & AUTHENTIC U.S. Treasury $2 Bills Our price is a LOW $13.95