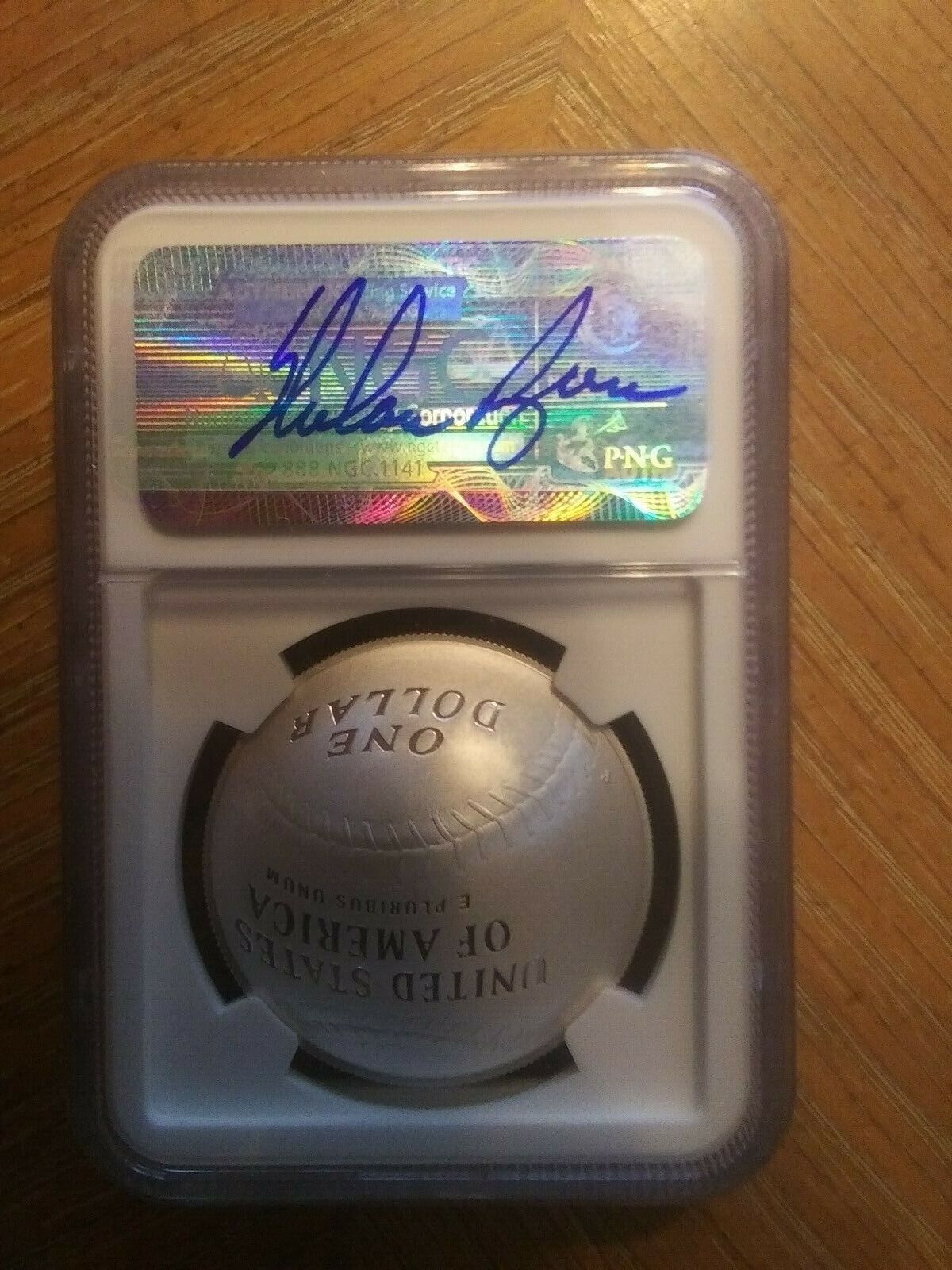 HISTORY IS CAPTURED HERE AS HALL OF FAME LEGEND NOLAN RYAN SIGNED A DOZEN SILVER HOLOGRAM LABELS IN SEPTEMBER 2014 FOLLOWING THE SOLD OUT RELEASE BY THE U.S. MINT OF THE BASEBALL HALL OF FAME PROOF COIN. THE SIGNED HOLGRAM LABEL IS AFFIXED TO THE REVERSE OF THE SLABBED COIN. RYAN'S SIGNATURE IS GUARANTEED TO PASS PSA/DNA OR JSA CERTIFICATION AS IT IS AUTHENTICATED ON A LETTER OF AUTHENTICITY FROM MLBPAA (MAJOR LEAGUE BASEBALLPLAYERS ALUMNI ASSOCIATION). THE COIN WAS AN INSTANT SELLOUT AT THE MINT AS IT WAS THE FIRST EVER COIN MINTED BY THE US.MINT WITH A CONCAVE AND CONVEX OBVERSE AND REVERSE. THE WINNER WILL ALSO RECEIVE THE ORIGINAL U.S. MINT PACKAGING FOR THIS COIN. IT DOESN'T GET ANY BETTER! Jump to search Nolan RyanRyan with the Texas Rangers in 1990PitcherBorn: January 31, 1947 (age 72) Refugio, Texas Batted: Right Threw: Right MLB debutSeptember 11, 1966, for the New York MetsLast MLB appearanceSeptember 22, 1993, for the Texas RangersMLB statisticsWin–loss record324–292Earned run average3.19Strikeouts5,714Teams New York Mets (1966, 1968–1971) California Angels (1972–1979) Houston Astros (1980–1988) Texas Rangers (1989–1993) Career highlights and awards 8× All-Star (1972, 1973, 1975, 1977, 1979, 1981, 1985, 1989) World Series champion (1969) 2× NL ERA leader (1981, 1987) 11× Strikeout leader (1972–1974, 1976–1979, 1987–1990) Los Angeles Angels No. 30 retired Houston Astros No. 34 retired Texas Rangers No. 34 retired Angels Hall of Fame Houston Astros Hall of Fame Texas Rangers Hall of Fame Major League Baseball All-Century Team MLB records 5,714 career strikeouts 7 career no-hitters Member of the National Baseball Hall of Fame Induction1999Vote98.8% (first ballot) Lynn Nolan Ryan Jr. (born January 31, 1947), nicknamed The Ryan Express, is an American former Major League Baseball (MLB) pitcher and a previous chief executive officer (CEO) of the Texas Rangers, and Houston Astros. Over a record 27-year career, Ryan pitched for the New York Mets, California Angels, Houston Astros, and Texas Rangers. He was inducted into the Baseball Hall of Fame in 1999.[1] Ryan was a right-handed pitcher who consistently threw pitches that were clocked above 100 miles per hour (161 km/h). He maintained this velocity throughout his career, even into his 40s. Ryan was also known to throw a devastating 12–6 curveball at exceptional velocity for a breaking ball.[2] Ryan had a lifetime record of 324–292 (.526) and was an eight-time MLB All-Star. His 5,714 career strikeouts is an MLB record by a significant margin.[1] He leads the runner-up, Randy Johnson, by 839 strikeouts. Similarly, Ryan's 2,795 bases on balls lead second-place Steve Carlton by 962—walking over 50% more hitters than any other pitcher in MLB history. Ryan's lifetime batting average against of .204 is also a major league record. Ryan, Pedro Martínez, Randy Johnson, Trevor Hoffman, and Sandy Koufax are the only five pitchers inducted into the Baseball Hall of Fame who had more strikeouts than innings pitched. Ryan is one of only three players in history to have his number retired by at least three teams, along with Jackie Robinson (whose number was retired by Major League Baseball) and Frank Robinson. Ryan is the all-time leader in no-hitters with seven, three more than any other pitcher. He is tied with Bob Feller for the most one-hitters, with 12. Ryan also pitched 18 two-hitters. Despite this, he never pitched a perfect game, nor did he ever win a Cy Young Award. Ryan is one of only 29 players in baseball history to hav