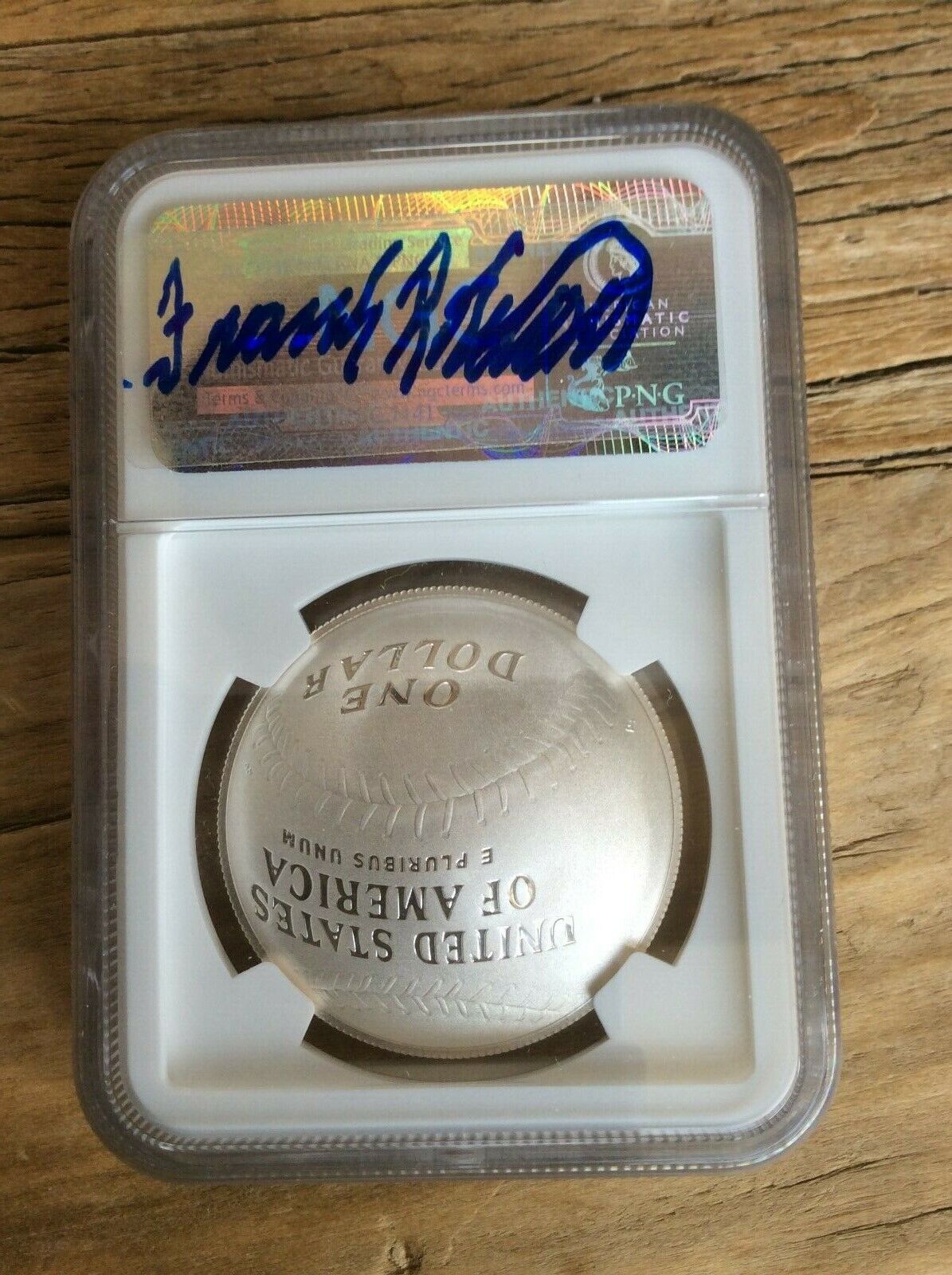 HISTORY IS CAPTURED HERE AS HALL OF FAME LEGEND FRANK ROBINSON SIGNED A DOZEN OF SILVER HOLOGRAM LABELS IN 2014 FOLLOWING THE SOLD OUT RELEASE BY THE U.S. MINT OF THE BASEBALL HALL OF FAME PROOF COIN. THE SIGNED HOLGRAM LABEL IS AFFIXED TO THE REVERSE OF THE SLABBED COIN. ROBINSON'S SIGNATURE IS GUARANTEED TO PASS PSA/DNA OR JSA CERTIFICATION AS IT IS AUTHENTICATED ON A PHOTO LETTER OF AUTHENTICITY FROM MLBPAA. THE COIN WAS AN INSTANT SELLOUT AT THE MINT AS IT WAS THE FIRST EVER COIN MINTED BY THE US.MINT WITH A CONCAVE AND CONVEX OBVERSE AND REVERSE. THE WINNER WILL ALSO RECEIVE THE ORIGINAL U.S.MINT PACKAGING FOR THIS COIN. IT DOESN'T GET ANY BETTER! Frank Robinson Frank RobinsonRobinson in 1961Outfielder / ManagerBorn: (1935-08-31)August 31, 1935 Beaumont, TexasDied: February 7, 2019(2019-02-07) (aged 83) Los Angeles, CaliforniaBatted: RightThrew: RightMLB debutApril 17, 1956, for the Cincinnati RedlegsLast MLB appearanceSeptember 18, 1976, for the Cleveland IndiansMLB statisticsBatting average.294Hits2,943Home runs586Runs batted in1,812Managerial record1,065–1,176Winning %.475TeamsAs player Cincinnati Reds (1956–1965)Baltimore Orioles (1966–1971)Los Angeles Dodgers (1972)California Angels (1973–1974)Cleveland Indians (1974–1976) As manager Cleveland Indians (1975–1977)San Francisco Giants (1981–1984)Baltimore Orioles (1988–1991)Montreal Expos / Washington Nationals (2002–2006) As coach California Angels (1977)Baltimore Orioles (1978–1980)Milwaukee Brewers (1984)Baltimore Orioles (1985–1987)Career highlights and awards14× All-Star (1956, 1957, 1959, 1959², 1961, 1961², 1962², 1965–1967, 1969–1971, 1974)2× World Series champion (1966, 1970)NL MVP (1961)AL MVP (1966)World Series MVP (1966)Triple Crown (1966)NL Rookie of the Year (1956)Gold Glove Award (1958)AL Manager of the Year (1989)Cincinnati Reds No. 20 retiredBaltimore Orioles No. 20 retiredCleveland Indians No. 20 retiredCincinnati Reds Hall of FameBaltimore Orioles Hall of FameCleveland Indians Hall of FameWashington Nationals Ring of HonorMember of the National Baseball Hall of Fame Induction1982Vote89.2% (first ballot) Frank Robinson (August 31, 1935 – February 7, 2019) was an American outfielder and manager in Major League Baseball (MLB) who played for five teams from 1956 to 1976, and became the only player to be named the Most Valuable Player of both the National League and American League.[1] He was named the NL MVP with the Cincinnati Reds in 1961 after leading the team to the pennant with a .323 batting average, and won the AL MVP in his first season with the Baltimore Orioles in 1966 after winning the Triple Crown, helping lead the club to World Series titles in 1966 and 1970. A 14-time All-Star, his 586 career home runs ranked fourth in major league history at the time of his retirement, and he ranked sixth in total bases (5,373) and tenth in runs scored (1,829).[2] Robinson was elected to the Baseball Hall of Fame in his first year of eligibility in 1982. In 1975, Robinson became the first black manager in major league history.[3] He managed the Cleveland Indians during the last two years of his playing career, compiling a 186–189 record. He went on to manage the San Francisco Giants, the Baltimore Orioles, and the Montreal Expos/Washington Nationals. For most of the last two decades of his life, Robinson served in various executive positions for Major League Baseball, concluding as honorary President of the American League.[4] On Sep-30-19 at 09:26:59 PDT, seller added the following information: CORRECTION: THIS IS A MS 70 EARLY RELEASE SIGNED BBHOF $1 SILVER COIN.