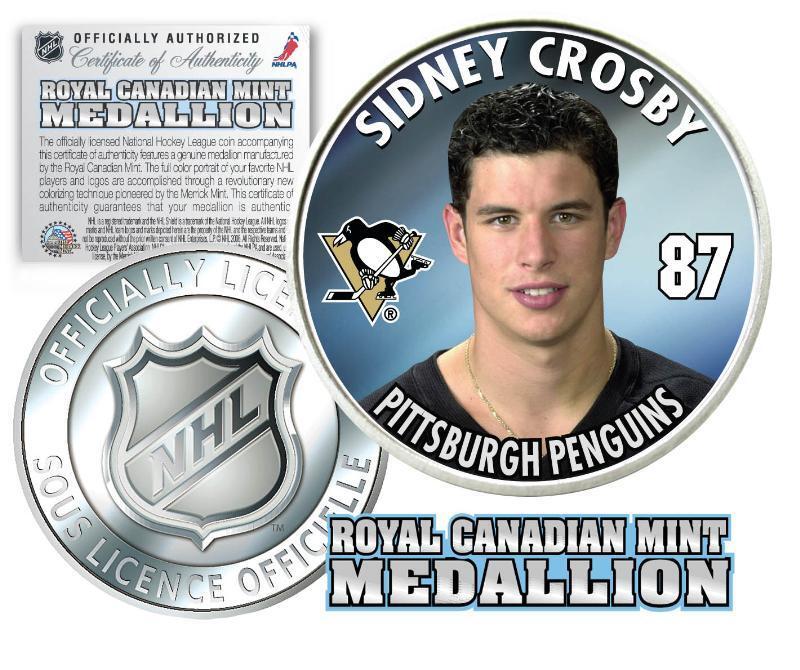 SIDNEY CROSBY ROOKIE FIRST-EVER ROYAL CANADIAN MINT MEDALLION NHL Edition - Limited to 870 IMPORTANT INFORMATION. PLEASE READ This is the first-ever Royal Canadian Mint colorized Sidney Crosby Rookie NHL Coin. Each coin was manufactured exclusively by the famous ROYAL CANADIAN MINT. The colorization on the coin is so amazing; it almost looks like a work of art. I have never seen such magnificent artwork on a coin. One side of the coin features Sidney Crosby with the Pittsburgh Penguin Logo and his #87. The other side of the coin features an embossed Officially Licensed NHL Logo with American and French wording. The Royal Canadian Mint did a great job in manufacturing these coins which are of the highest quality and the Merrick Mint which is the #1 world leader in colorization did an equally impressive job. Each coin comes displayed in a coin capsule with a certificate of authenticity that features an NHL Hologram. Each coin is about the size of a U.S. Half Dollar which is pretty big (Diameter = 1.18"). Limited Edition of 870. At this price, they are sure to sell-out fast...I only have a very limited amount. HIGHLIGHTS: Officially Licensed & Authorized by the National Hockey League (NHL). First Ever Royal Canadian Mint Colorized Medallion featuring then ROOKIE, Pittsburgh Penguins Sidney Crosby. Each coin features an Official image of Sidney Crosby, the Pittsburgh Penguins Logo and Crosby's #87 fused in full color directly onto the obverse of each coin. Authentic & Genuine colorization process pioneered the Merrick Mint. Coin comes displayed in coin holder. Certificate of Authenticity Included with your an NHL Official Hologram Limited Edition of 870. Please note that these are GENUINE & AUTHENTIC 2005-06 Royal Canadian Mint medallions. Our price is a SUPER LOW $7.95 Retail price is $49.95