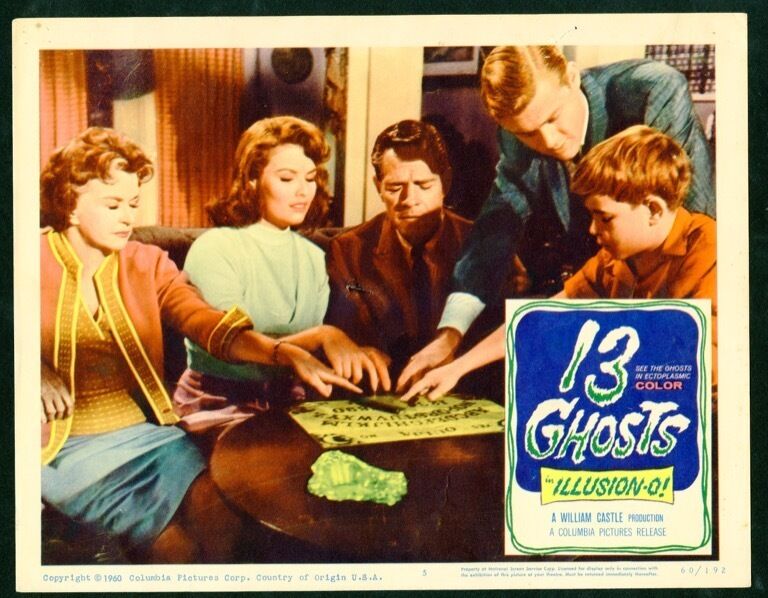 Columbia Pictures Original Scene Lobby Card (11x14) Very Fine Condition Original Columbia Pictures original scene lobby card (11x14) for the William Castle horror classic, 13 GHOSTS (1960) starring Charles Herbert, Jo Morrow, Martin Milner, Donald Woods, Rosemary DeCamp, and Margaret Hamilton. This fun horror film is the story of a family who inherits a house with twelve ghosts and space for one more. The house used in the film would later be used as the home of TV's "The Munsters." Wicked Witch of the West Margaret Hamilton gives a memorable performance as the eccentric housekeeper. The film also used a nifty gimmick called "Illusion-O," a pair of red and blue colored glasses. During the color ghosts sequences, audiences could see the spirits only with the red "Ghost Viewer" side and remove them with the blue "Ghost Remover." This cinematic breakthrough was devised by gimmick-master William Castle. Here is the seance scene, with all of the cast conjuring ghosts! Very Fine Condition. One of the best cards from the set. WILLIAM CASTLE - Actor/Director Charles Herbert - Actor Jo Morrow - Actor Martin Milner - Actor Rosemary DeCamp - Actor Donald Woods - Actor Margaret Hamilton - Actor